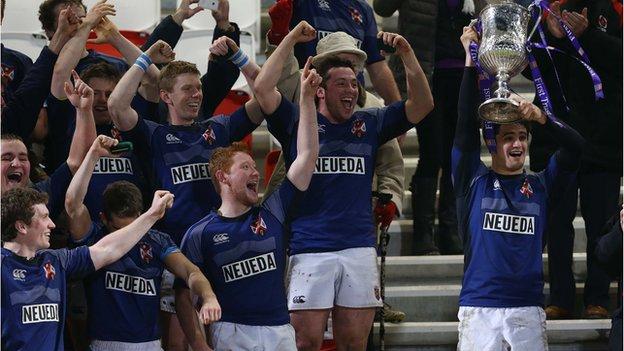 Queen's University have won the Ulster Senior Cup by beating Ballynahinch 16-10 in Wednesday's final at Ravenhill.

Ballynahinch, who are two divisions above Queen's in the All-Ireland League, led 10-5 after tries by wingers Aaron Ferris and Matthew Arneill.

Centre Stuart McIlwaine got the opening Queen's try and winger Michael McCauley touched down to leave the sides locked at 10 points each at half-time.

Two penalties in the second half by Richie McMaster sealed the Queen's win.

Ballynahinch piled on late pressure but Division 2A side Queen's held on to lift the trophy for the 23rd time in their history.