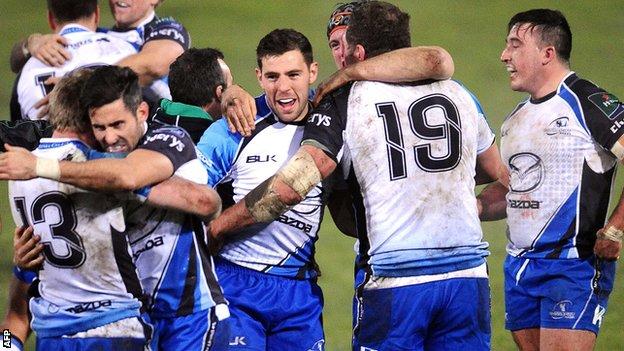 - The spectacular weekend for the four Irish provinces

- Who the contenders are to play on the wings for England

- What he makes of an Anglo-Welsh league

- Why the English clubs are right to stand up for themselves

- Leicester's chances of progressing in the Heineken Cup

Hi Jerry, what a weekend for Irish rugby! Leinster, Munster and Ulster all hammered their opposition, and Connacht had a superb win away to Toulouse. My question is: do you think each team can maintain this type of intensity for their return matches next week, and do you think they'll also be able to translate these performances to the national side come the Six Nations? Chris

Hi Chris, Leinster and Munster both have a proven track record in Europe as former champions and Ulster, finalists in 2012, have made big improvements over the past few seasons - I expect these three to qualify for the final stages of the Heineken Cup.

It's great that Connacht got the victory over Toulouse and I don't believe it will be any easier for the French in Galway this weekend, although you would expect them to win. I don't see Connacht getting to the knockout stages.

Joe Schmidt has the task of pulling all that talent together to make the national team fulfil its potential. If Ireland perform in the Six Nations to the same intensity as they did in their agonising defeat by New Zealand then you'd have to say he's doing a good job. That's all the Irish players have to do - find that intensity again.

Hi, Jerry, what do you make of the fantastic performance of the four Irish teams at the weekend and the disgrace of the English clubs pulling out of the Heineken Cup? It was a great performance by Harlequins away against Racing Metro) - I love the Heineken Cup more than the Six Nations! Denis

No doubt last weekend was a tremendous boost for Irish rugby with the results but one weekend doesn't make a great season - it's about how things end, which they all know. It's way off the mark calling the English clubs a disgrace because they won't play in a competition run by an underperforming administration. The English and currently the Welsh have their reasons for not wanting to participate and as we stand at the time of writing the Heineken Cup only has the Italians, French, Irish and Scottish.

Hi Jerry, with Toulouse losing to Connacht, do you think Saracens could win at Toulouse and win the pool? zacattack99

Hi, there's no reason why Sarries can't win in France, I'm not expecting that result though. Toulouse's problems this season have been more away from home so I would say it was a blip against Connacht and don't expect them to slip up for the rest of the pool.

Hi Jerry, with Leicester now only two points behind Ulster - who still have to travel to Welford Road - how do you rate Leicester's chances of reaching the knockout stages? n4meless

Hi, I had Tigers as one of my qualifiers and it's still on, although with two away games to come and the last home match being against Ulster it doesn't make it the forgone conclusion that Tigers would like. So much rests on the away game this weekend, win away to Montpellier on the Mediterranean coast and I'd have them going through - I'm still going with Tigers to get the job done.

Hey Jezza, what happened to Northampton against Leinster? I know we have a few key guys (Ben Foden, George Pisi and Alex Corbisiero) out but Leinster were rampant. Is there any chance Saints can beat them next week? Cheers. Rich_McMan

The French clubs are about to sign a huge TV deal which will give them even more money to keep taking players from England, Wales, Scotland and Ireland - wake up and smell the coffee

Hi Rich, if Saints can hold onto the ball they can definitely make a game of it, but you can't expect to challenge a team of Leinster's calibre if you turn over the ball 27 times in a game. Without doubt Leinster have plenty of class and they even left a few tries out there last week, but I wouldn't expect Saints to make that many unforced errors again. However, Leinster can put out a XV composed entirely of internationals and I don't see them losing at home.

Jerry, will the lack of European competition next year for English clubs (as it stands after they confirmed they are pulling out of the Heineken Cup) help or hinder us come the World Cup? Will it give our players more rest, fewer niggles and therefore more chance to win, or will it leave us soft and not battle hardened? I fear the latter. fletcher

Hi fletcher, if the England clubs can fill the weekends left by the European cup with some meaningful fixtures, possibly against the Welsh regions, South African clubs or both, then I don't believe missing out on Europe will be such a big blow. Europe without the top four Welsh regions and no English clubs won't be the same for the other home union sides either.

Hi Jeremy, with Exeter wing Jack Nowell in the Saxons set-up and Bath full-back Anthony Watson training with the senior squad during the last international period, how long do you think it will take until the Under-20 World Cup winning team start to make an impact in the Test match arena? And will the Junior World Cup win have any long term significance for England? cornish10

Hi cornish10, to have any long term significance I think England would have to start winning that competition on a more regular basis like New Zealand have done. Over the years there have been a good number of England age group players who have made it all the way through to the senior team.

You generally have to have a great season with your club and then back it up before getting the opportunities further up the ladder. Life moves very quickly in rugby, but for those England players who were in the victorious Under-20 squad it's a fantastic achievement that will be there for the rest of their lives to enjoy and remember.

Hi Jerry, this weekend saw strong performances from Nowell and Gloucester's Jonny May. Do you think they're at the front of the race to fill the England wing berths come the Six Nations? pt12wak

Hi Jez, with Christian Wade and Marland Yarde out, Chris Ashton not performing for England and Foden, who was used out of position on the wing, also out injured, who will England have wide in the Six Nations. Toby Flood is championing Leicester's fit-again wing Miles Benjamin but I think Jack Nowell looks fantastic for Exeter and should be given his chance, what do you think? Sam Gaines

Hi, I would be surprised if Nowell is given an opportunity given he's very short on games this season. For me there aren't any immediate obvious choices, which isn't a great situation to be in. Saracens wing Dave Strettle is the top try scorer in the league and has made the most clean breaks, he's a solid pick.

May isn't far down the list of try scorers and has made a fair number of clean breaks so he would get my vote. I would be tempted to play Watson or at least include him in the match day squad because of his ability and the fact he can cover the back three comfortably.

It's probably too late for Benjamin to make a big enough impression to force his way in as he has only just returned from injury. Ashton could very well make it again because of all these injuries, but I would go with May and Strettle.

Jerry, do you agree that as in the past the Rugby Football Union and the Premiership clubs appear to have little concern about the consequences of their actions on rugby? Are they just grasping at any excuse to maintain their stance in their attempt to rule northern hemisphere rugby? How much harm will it do the England team if they end up with a glorified LV Cup again with the Welsh regions? stoobz

Hi stoobz, I don't agree at all. There's a lot at stake and the future of the clubs cannot be left in the hands of the unions, who will put their needs before the clubs'. The clubs should be left to run their competitions while the unions run the competitions for the international teams. The new Rugby Champions Cup was all about democracy for all the participants - it wasn't about the English or the French making the decisions, it was all together.

The power in the north is totally with the French. The top man at Heineken Cup organisers ERC, Jean-Pierre Lux, is French, the boss of the FFR (French Rugby Federation) Pierre Camou is very influential and the chairman of the International Rugby Board, Bernard Lapasset, is also French.

The French clubs are about to sign a huge TV deal which will give them even more money to keep taking players from England, Wales, Scotland and Ireland. Wake up and smell the coffee - the French are the most powerful and the most influential and are having it away.

Once all the home union clubs realise they need to pull together to stop the French having all the best players we might get some common sense prevailing, but until that happens expect more of the same.

Hi Jeremy, am I the only person who is excited by the prospect of an Anglo-Welsh Premiership? Isn't this what the Welsh regions have always wanted? This could be a tournament to rival the Top 14 and the football Premier League. MovingForward

Hi MovingForward, if the Welsh regions were to join the Premiership it would make for an even more exciting and competitive league. There's no reason why the Welsh regions shouldn't join the English, after all there are Welsh football clubs that are part of English football's league structure.

If it is the way for the regions to secure a more sustainable financial future and be able to keep most of their international players it has to make sense. And if it means not having to rely so much on the funding from the Welsh Rugby Union (WRU), that also has to be a positive. The WRU could start putting even more money into their grassroots and community programme, which is producing such brilliant players for Wales.