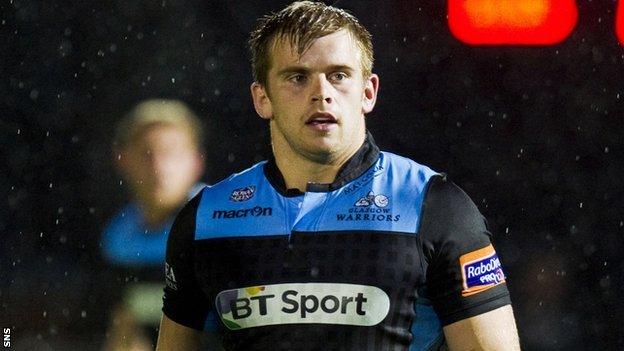 The Welsh side travel to Scotland for the return fixture on Friday.

"A huge performance this week and hopefully [we'll] get a win and then we can push on and see what happens after that."

Glasgow are currently bottom of Pool 2 on five points, four behind Cardiff in second.

We've got to go out there and put a massive performance in, not just for ourselves but for the Glasgow crowd mainly

Tries from Sean Maitland and Leone Nakarawa were not enough to get them back in a game they always trailed in at Cardiff Arms Park.

Head coach Gregor Townsend has already admitted his side face a tough task to progress in the competition.

After Friday's match at Scotstoun, Warriors will have games against Exeter (away) and Toulon (home) in January.

"We need to look at every game individually and hopefully push for three wins," said MacArthur, who has been capped three times by Scotland.

"But our main focus, our only focus, this week has been on this first game and to put a good performance in.

"We put pressure on ourselves every week to go out and perform. We were disappointed we never managed to put in the performance we wanted to last week, which puts even more pressure within the camp.

"Hopefully you'll see that this weekend that we're ready to go."

MacArthur, 26, also highlighted the importance of home advantage for the clash with Pro12 rivals Cardiff.

"We love playing in front of a good crowd," he added.

"We've got to go out there and put a massive performance in, not just for ourselves but for the Glasgow crowd mainly.

"The last few years have been fairly successful but this year we want to push further on."