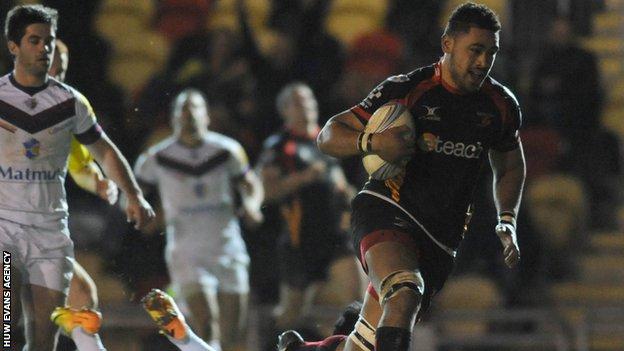 Newport Gwent Dragons' hopes of progressing in the Amlin Challenge Cup look slim after a 32-13 defeat away to Bordeaux-Begles.

The Welsh side, who had three players sent to the sin bin during the match, were 19-6 down after 28 minutes in the south western France city.

A Toby Faletau converted try gave the Dragons hope just before half time.

Bordeaux were quick off the mark racing into a 19-6 lead thanks to the boot and a seventh minute try by Sanchez.

Halfway through the first half the Dragons rallied but centre Ashley Smith knocked on with the line at his mercy. Captain Andrew Coombs was sent to the bin shortly afterwards.

But despite being down to 14 men the Dragons closed the gap to just six points, as number eight Toby Faletau crashed over for a converted try.

Just a few minutes after the break Dragons flanker Lewis Evans was yellow carded in a disjointed and error strewn second half.

Sanchez extended Bordeaux's lead to 22-13 with the boot, before Robert Sidoli became the third Dragon to see yellow.

"Lots of aspects we were far better than the opposition," said Jones.

"But the scrum was difficult for us and what compounded that was a knock on ratio in the first half, which resulted in points each time for the opposition."