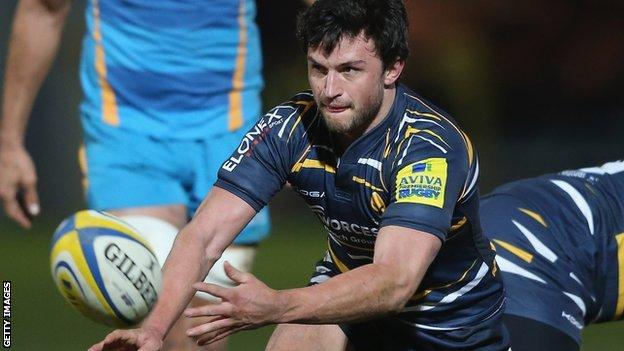 Worcester scrum-half Jonny Arr admits his latest injury setback has come at the worst possible time as he tries to hold down a regular starting place.

Arr, 25, missed the start of the season with a hamstring strain and suffered a similar injury at Sale in November.

"It was massively frustrating. Everyone was starting with a clean slate," Arr told BBC Hereford and Worcester.

It could be a bit of a scalp if we can go over there and win with some of their superstars.

"I've got an opportunity to get it right rather than rush myself back and risk doing further damage."

Arr, who signed a new contract at Sixways in January, first pulled his left hamstring during pre-season and had to wait until October to get back into first-team contention.

And after pulling the same muscle in his right leg against Sale, he then sustained a further setback on his road to recovery.

"Things were progressing pretty well but I picked up another pull in my rehab work," Arr said.

"The physios here are taking everything into consideration and I've seen a specialist and hopefully, with both their opinions, they can formulate a plan to get me fighting fit again.

"They're still coming up with a rehab plan for the short term and I'm waiting to hear about a return date and I'll try and beat them to it."

The Warriors youth team graduate player has little choice but to watch from the sidelines as his teammates try to turn around their disappointing season.

With the club bottom of the Premiership, their hopes of making the latter stages of the Amlin Challenge Cup appear remote after their 19-15 defeat against Biarritz at Sixways.

Nothing other than a win in the return group match in France on Thursday will do if they are to progress, and Arr knows they have no margin for error.

"I know the boys were hugely disappointed with the defeat, especially the manner of it coming with the last play of the game.

"It could be a bit of a scalp if we can go over there and win with some of their superstars.

"There's a lot of hope we can go and avenge the defeat."