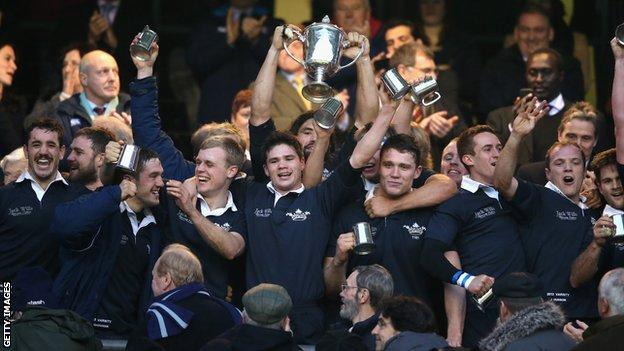 Sam Egerton became the first player in Varsity Match history to be sent off as 14-man Oxford secured their fourth successive victory over Cambridge.

Cambridge went ahead through Nick Jones's try but captain John Carter and Henry Lamont both touched down to give the Dark Blues a 13-10 half-time lead.

Scrum-half Egerton extended the advantage to 10 but was then dismissed for an incident off the ball.

Nicholas Gardner and Toby May exchanged tries as Oxford held on to win.

The Dark Blues, who had 13 returning Blues in their starting XV, had the better of the opening exchanges at Twickenham and should have gone ahead but John Hudson's penalty fell short of the posts.

And, despite the early pressure, it was Cambridge who opened the scoring when Jones went over in the corner after a sweeping move from left to right. After some deliberation, the TV match official confirmed the try and Donald Stevens converted.

Oxford came roaring back, however, and Carter, making his fourth appearance in the annual fixture, forced his way over following a driving maul. Hudson again missed his kick.

Stevens extended the Light Blues' advantage but the fly-half was soon forced off with a shoulder injury and it was not long before Oxford drew level.

The ball was worked across to wing Lamont and he produced an excellent finish in the corner, stepping his way past a couple of challenges.

Hudson's penalty following an infringement at the scrum, a department Oxford dominated throughout, in the closing stages of the opening period put the Dark Blues in front for the first time heading into the break.

Egerton, who scored a brilliant try in helping his side come from behind to win last year, touched down within three minutes of the restart to put daylight between the teams.

But, having put Oxford in a position of relative control, Egerton was then sent off with 30 minutes remaining for, according to the referee, "interfering" with a Cambridge player's face at the base of a ruck.

Despite the numerical disadvantage the Dark Blues continued to press and Gardner forced his way over for a crucial score, before May crossed for Cambridge to keep hopes of a comeback alive heading into the final quarter.

But Hudson kicked a further two penalties to take the sting out of the tie and ensure Oxford won the 132nd meeting between the two sides.