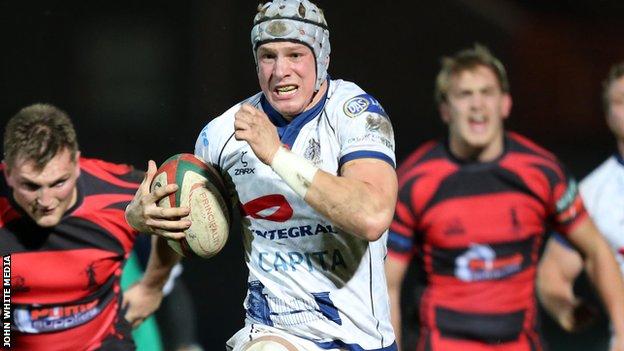 Bristol broke three club cup records as they beat Aberavon 78-0 in the British and Irish Cup.

The west country side scored a record 12 tries as well as securing their highest ever points tally and the most conversions in a match for a cup game.

The initial fixture was abandoned because of a hole in the pitch.

"I'm more pleased with performances and the way the boys played, particularly in the first 20 minutes of the game," said first-team coach Sean Holley.

"We felt in the second quarter of the game we let ourselves down a little bit and came off the pace."

Four tries in the opening stages secured a bonus point inside 11 minutes, whilst flanker Mitch Eadie went onto score on hat-trick on his competitive debut.

"I dreamed as a kid of wearing a Bristol shirt and with that passion and winning by so many points is a dream for me," Eadie told BBC Radio Bristol.

"We talked a lot about accuracy and I thought that was there tonight with the effort the boys put in."