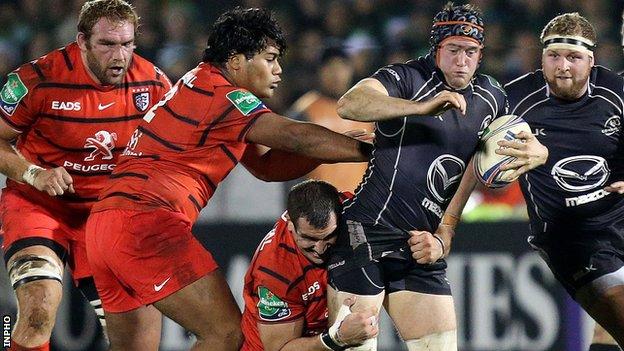 Maxime Medard's two first-half tries set Toulouse on the way to victory and a bonus point from their clash with Connacht at the Sportsground in Galway.

Dan Parks kicked Connacht's points in the first half.

Toulouse are tied at the top of Pool Three with Saracens and they meet in the next round of games on 11 January.

A flu bug had disrupted Connacht's preparations and Nathan White and Frank Murphy were late withdrawals from the replacements' bench.

But they made a positive start with Robbie Henshaw and Rodney Ah You carrying with intent, and Parks powered home a penalty from 44 metres out.

Toulouse responded through the boot of Lionel Beauxis and used turnover ball to grab the game's opening try, Medard hacking on a kick through from Beauxis and beating Eoin Griffin to the touchdown.

Beauxis converted but Connacht quickly replied through a snap drop-goal from Parks after Toulouse failed to gather the restart.

The second try came when fly-half Beauxis caught the Connacht defence flat with a pinpoint cross-field kick and Medard muscled past Robbie Henshaw's challenge to dot down on the left.

Parks landed another crisply struck drop-goal for the hosts but that was to be their last score of the evening.

Just before half-time, the French side's forwards upped the ante and their power set up strong-carrying hooker Tolofua for a deserved try.

Beauxis added the extras for a 22-9 lead at the interval.

The second half was scoreless until Toulouse worked a short 55th-minute line-out and Tolofua linked with Yannick Nyanga, who sent number eight Picamoles powering through Fionn Carr's tackle to score in the left corner.

Beauxis scored his second penalty and a terrific solo try from halfway from Fickou finished off a satisfying night's work for the four-time European champions.