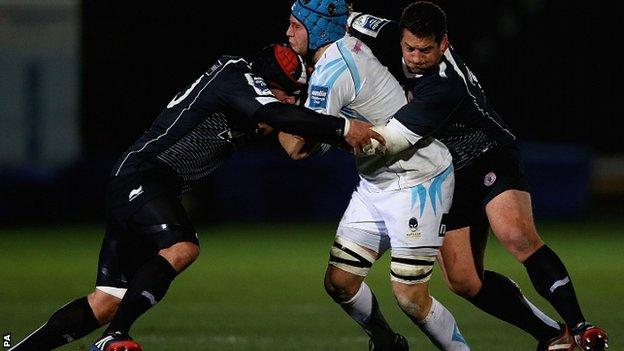 Worcester suffered a dramatic Amlin Challenge Cup defeat at the hands of Biarritz for the second time in a week.

Teddy Thomas scored his second try of the match with seven minutes remaining to break the deadlock at 25-25.

The English club had after heavy fog cancelled their flight from London.

Worcester's starting XV flew from Bristol to Toulouse on Thursday morning and the rest of the squad flew from London Stansted.

The Warriors had conceded a to Biarritz last week, but made a superb start to the return fixture.

Jeremy Su'a scored a try after 19 seconds and, despite two Biarritz tries from Yann Lesgourgues, the visitors led 13-12 at half-time.

When Thomas Synaeghel was sent off, tries from Max Stelling and Paul Warwick saw the Warriors power further ahead, but two tries from Thomas were enough to give Biarritz victory.

The result takes Biarritz past Sale at the top of Pool One, and leaves Worcester without a win in the competition.