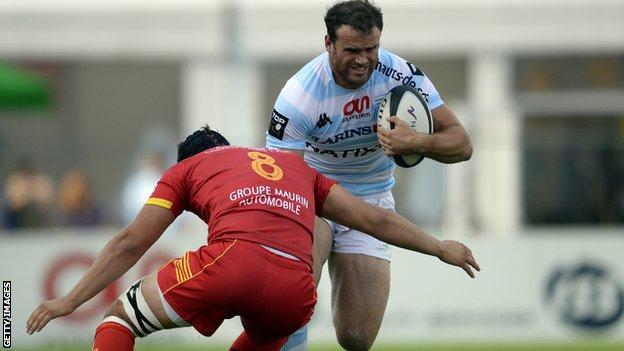 Wales centre Jamie Roberts is set for a return to action with Racing Metro following a 12-week injury absence.

The 27-year-old sustained a ligament tear in his left ankle in only his third game for the French club following his summer move from Cardiff Blues.

"I found it very hard," Roberts said of his spell on the sidelines.

I'm ready to go again, really looking forward to putting my boots back on and winning with this team

"I was just starting to find my feet on the pitch, beginning to pick up all the calls and so forth, and to get injured at that time was a real blow.

"But as tough as it has been, I have tried to look at it positively.

"Over the past three or four years, I have played a lot of rugby. It's been pretty much non-stop, so the only way to look at my injury was as a rest in disguise.

"But now I'm ready to go again, really looking forward to putting my boots back on and winning with this team."

Paris-based Racing Metro have struggled during Roberts' absence and are eighth in the Top 14 despite a number of high-profile signings, including Dan Lydiate and Jonathan Sexton.

They lost 32-8 to Harlequins in the Heineken Cup last weekend and face the English side again at the Twickenham Stoop on Sunday.

Roberts and Lydiate were recently joined by another Welshman at Racing, with scrum-half Mike Phillips signing following his dismissal by Bayonne.