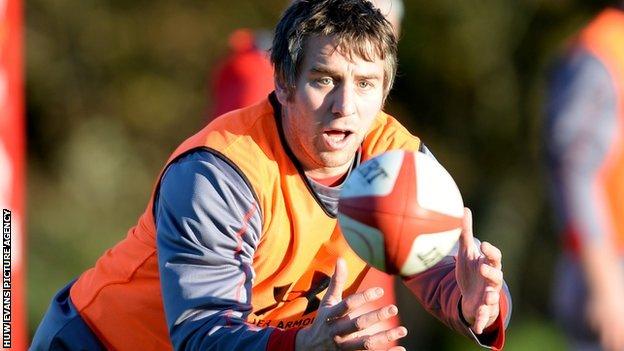 Ex-Wales captain Ryan Jones would like to see his Ospreys team play in an Anglo-Welsh competition next season.

He believes Wales have to come up with a structure to stop the exodus of Welsh players to France and England.

"We've got to create a domestic environment, from the national team down, where players don't want to leave," said Jones.

"My worry is it's going to leave a scar on the domestic game which is going to take a while to heal."

Added Jones: "We've got to be competitive financially and we've got to offer above and beyond to keep our best players.

"They need to be playing in teams with the likes of George [North], Leigh [Halfpenny] and Sam [Warburton].

The regions have stated they want to play against English clubs, rather than be forced by the Welsh Rugby Union (WRU) to compete in the Heineken Cup.

Representatives from the Ospreys, Blues, Scarlets and Dragons will have talks with the WRU on Wednesday.

"I've said for years a British league would be absolutely fantastic," Jones said.

"I don't understand the nuts and bolts of it and all the intricacies but if I had my way that would be it."

Wales' regions could take legal action for the right to play in cross-border tournaments without permission from the WRU and there is increasing speculation they will not sign the participation agreement with the union before the 31 December deadline.

The four regions have seen a number of top Welsh internationals depart for clubs in France and England during recent seasons.

Wales captain Sam Warburton has given Cardiff Blues and the WRU a Wednesday deadline to put together a deal to keep him in the country.

Jones, who skippered Wales against Tonga during the autumn series, believes an Anglo-Welsh competition would help regions to retain players.

Jones has seen a number of high-profile players depart the Ospreys in recent years with Mike Phillips, James Hook and Lee Byrne moving to France.

Lock Ian Evans will leave at the end of the season to join Toulon while hooker Richard Hibbard has been linked with Gloucester.

Wales and Lions pair Adam Jones and Alun Wyn Jones are both out of contract at the end of the season.

But Ryan Jones insists speculation about players' futures does not unsettle the team, who face Castres in the Heineken Cup on Friday.

"Each individual will make their own decision and choose their own path," Jones said.

"Whatever that may be they'll have the support of the team-mates around them.

"But come game time when the whistle goes it's one common goal and that's to play for the jersey and to be winners."