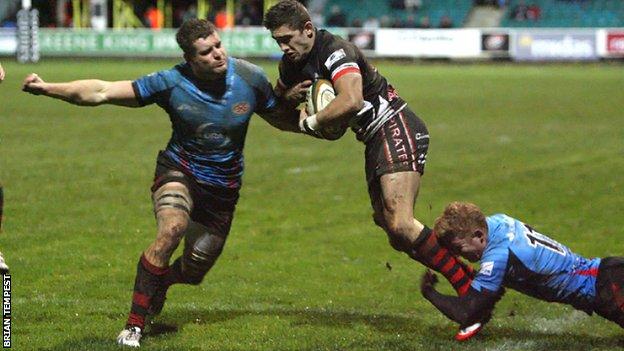 Cornish Pirates qualified for the quarter-finals of the British and Irish Cup with two games to spare, thanks to a 24-0 bonus-point win at Jersey.

Kieran Goss sprinted through from deep in his own half to claim the fourth try - the only score of the second period.

Jersey had plenty of the ball but could not breach a strong Pirates defence.

The first quarter of the game was closely contested and neither side could break the deadlock until Jersey prop Nick Selway was shown yellow and Moyle showed his pace to go over following a poor clearance.

Andrew scored the Pirates second following a line out before Phillips crossed the whitewash on the stroke of half time for another. Both tries came with the hosts again down to 14 men, this time with skipper Alex Rae in the sin bin.

The islanders continued to toil away after the break but lacked the penetration shown by the Pirates, and that was highlighted perfectly by the visitors' fourth touchdown.

On the attack, deep inside opposition territory, Jersey lost the ball and Goss took the opportunity to run nearly the length of the pitch and score in the corner.

It was Pirates' fourth bonus-point win out of four games in Pool Six and puts them 11 points above Ulster Ravens.