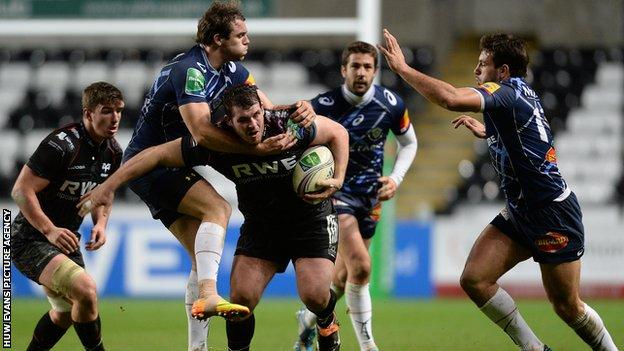 Ospreys claimed their first win of the Heineken Cup campaign with victory over Castres at the Liberty Stadium.

Biggar has claimed all Ospreys' 55 points in the competition this season.

Castres failed to claim a losing bonus point with scrum-half Rory Kockott kicked all the points with four penalties.

The home side were forced into a late change with Wales lock Ian Evans pulling out for family reasons and Tyler Ardron taking his place.

There was little at stake in game for the Ospreys, who could not advance in the competition after defeats to Leinster, Northampton and Castres.

The first half turned into a kicking contest as Biggar and Kockott swapped four penalties each.

All Castres' four transgressions came in and around the 22, with captain Remy Tales paying the price after the fourth penalty with a yellow card on 28 minutes for a professional foul.

Kockott's fourth penalty drew the scores level at 12-12 in the final minute of the first half.

The Ospreys might have gone into the break on level terms but they struggled up front, especially in the scrum, and also lost a crucial line-out in the French side's 22.

Castres, despite losing Richie Gray with a knee injury on 25 minutes, did look the more dangerous although wing Jeff Hassler had an excellent run into the 22 which did earn the Ospreys one of their four penalties.

In the second half the Ospreys gradually took control and turned around their problems in the scrum and all three of Biggar's second-half penalties came from Castres' infringements at the set-piece.

Ospreys were on the front foot when Biggar put his side into the lead after only three minutes of the second period and the Wales fly-half added two more penalties on 61 and 70 minutes to take Castres out of losing bonus point range.