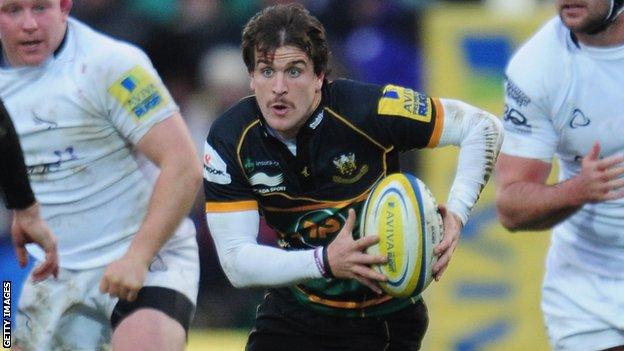 Northampton's Lee Dickson says they have to draw on memories of beating Ulster at Ravenhill when they face Leinster in Dublin in the Heineken Cup.

Saints went down 40-7 to Leinster at Franklin's Gardens on Saturday.

In 2012, Northampton became the first side to win at Ulster in four years of European rugby having lost to them the week before.

Scrum-half Dickson, 28, said: "We need a performance next week because today wasn't us. We are embarrassed."

He added: "We get another crack at them - and this happened to us with Ulster last year.

"We went there and took their unbeaten record. We've got to hold our heads up and make sure we move on now."

Saints were forced to replace their full-back James Wilson with wing Ken Pisi shortly before the match started, having already been denied the services of England full-back Ben Foden because of injury - although Dickson denies they can use that as an excuse.

"If you give a team like Leinster a 12-0 head start after five or 10 minutes, it's going to be tough to come back from.

"But it [the change] wasn't a massive disruption. We've got a great squad with world-class players across the park.

"You miss quality players like James and Ben but Ken came in and we know he's a good player. "

Saints travel to Leinster to play in front of at least 40,000 fans at the Aviva Stadium before a trip to Ospreys and a home match against Castres in the final match of the Pool One.

"You've got to have your hats off to the incredible team that they are," said Dickson. "But next week we've got to turn up all guns blazing."