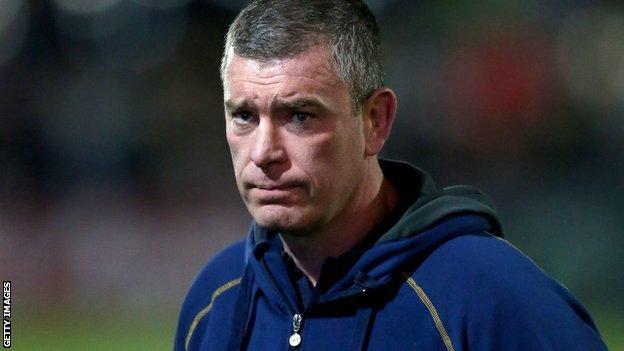 Worcester Warriors director of rugby Dean Ryan believes his side cannot start feeling sorry for themselves despite their dire run of results.

Struggling Warriors are bottom of the Premiership, without a league win all season, and narrowly lost Thursday's Challenge Cup match to Biarritz 19-15.

Struggling down the stretch

"Feeling sorry for ourselves isn't doing anything. It just compounds the feeling that everyone's against us, "Ryan told BBC Hereford and Worcester.

"That's life but let's get better."

He continued: "If we just keep moaning about everyone being stronger than us we then we might as well crawl away and feel sorry for ourselves and we're not going to.

"We're not going to win anything by shying away from the facts."

With the club having won only one match - at Cardiff Blues in the LV= Cup in November - all campaign, they already have a huge task on their hands if they are to avoid relegation to the Championship.

Ryan, in his first season at Sixways, has had to juggle a high turnover in playing and coaching staff and has been left frustrated by his side failing to find any consistency.

Thursday's defeat by Biarritz was the latest game in which Warriors have looked like winning only to let victory slip away in the closing stages.

It's becoming something that's weighing heavy on our shoulders and undermining some of the things we're improving in.

"Those last five or 10 minutes are causing a huge problem for us," Ryan said.

"We're not competitive in there, we lose our heads a little bit and psychologically it's becoming something that's weighing heavy on our shoulders and undermining some of the things we're improving in.

"This is the Worcester squad and we're going to have to work hard to improve in that last five or 10 minutes. We have to compete with whoever we're up against."

Former Northampton Saints' coach Nick Johnston was named as the new high performance director at Sixways last week to try an help improve results, and Ryan believes the side are getting better.

"We are improving. We're very good defensively. We were very good against a top side last week we just didn't finish the last five or 10 minutes - which is a recurring theme," he said.

"There isn't an easy answer but we've got people here now that are going to improve our fitness, strength and power levels.

"But it's not going to happen in a week."