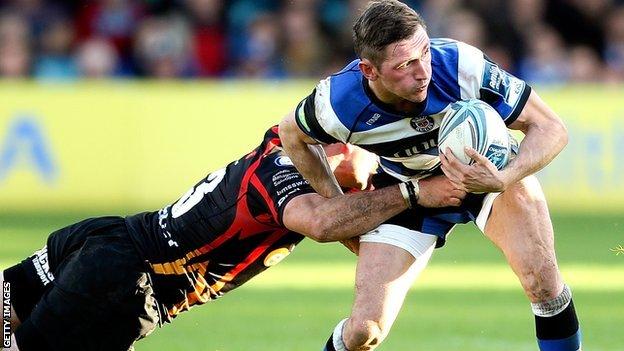 Bath head coach Mike Ford praised Richard Lane after the winger scored a hat-trick in his side's 55-8 victory against Mogliano in the Challenge Cup.

Lane, 20, has returned to the first-team after a lengthy spell on the sidelines with an injury.

"There's no doubting his ability but it's the toughness that I like about him," Ford told BBC Radio Bristol.

"Before his first try he took a heavy knock and he just got back up. That, for me, is everything."

Ford added: "He's gone through weeks and months of rehab but when he's come on the field he's shown toughness."

Lane's inclusion was one of 13 changes to the starting line-up for their convincing Pool Two victory in Italy, in which Wales international Gavin Henson also made his return from a calf injury,

"The plan was always to give him 60 minutes so there was no surprise there," Ford said of Henson's comeback.

"He's missed a lot of games and we just want Gavin to come back and play each week. He'll need a few games to find his true form but it was a tick in the box for him."