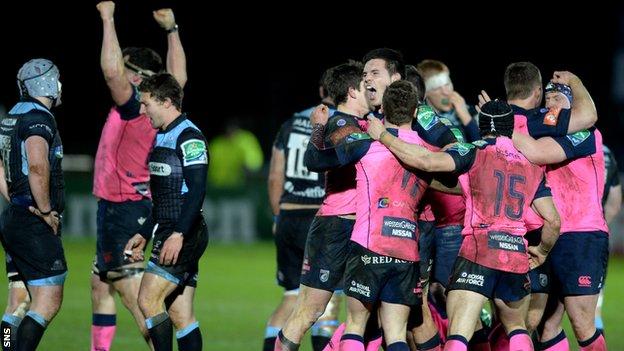 Cardiff completed a Heineken Cup double over Glasgow with a gutsy display at Scotstoun to keep alive their hopes of progress in the tournament.

Penalties from Rhys Patchell and Leigh Halfpenny gave the visitors a 6-0 lead at the interval.

Glasgow wasted good chances to put points on the board and fell further behind to another Halfpenny kick.

Ryan Grant delivered a late try for the home side, which was converted, but Blues held on for a vital victory.

With just one win from their previous three matches in Pool 2, Glasgow needed to prevail but a tendency to over-elaborate and a late penalty miss from Duncan Weir cost them dear against determined opponents, who move top of the group with 13 points.

These teams served up a high-tempo thriller last week but a strong wind, the tension of the occasion and some bizarre refereeing from Frenchman Pascal Gauzere made for a far more chaotic affair this time.

Patchell, who scored a try in last Friday's 29-20 win, banged over an enormous penalty from deep in his own half to open the scoring

Halfpenny then knocked a penalty wide from some 20m closer to the posts before the full-back made amends with a straightforward kick.

With a stiff breeze at their backs, the visitors were enjoying greater possession, winning more than their fair share at the breakdown and controlling the ball well.

But the pattern of play changed with a great slaloming break from Glasgow winger Tommy Seymour that led to a series of pick and drives from the home side.

With a glaring two-man overlap on, the move broke down after a hurried forward pass from Byron McGuigan.

And the frustration continued for the home side as they spent close to 10 minutes camped five metres out from the Blues' try-line.

The scrum was set six times, with the visitors twice guilty of infringing, the second indiscretion resulting in a yellow card for skipper Sam Hobbs.

With no penalty-try forthcoming, Glasgow kept up the pressure, finally releasing Alex Dunbar only for the centre to be held up as he crossed the line by the impressive Patchell.

A pantomime of handling errors immediately followed, with Glasgow winger Sean Maitland fumbling as he looked certain to plunge over in the corner.

Another close-range scrummage resulted in Ryan Wilson and McGuigan making ground before scrum-half Niko Matawalu sprang through a gap in the visiting defence but the home celebrations were cut short after the television match official ruled Rob Harley had opened up that space by grappling Patchell off the ball.

Cardiff, missing a host of first-team regulars, assumed greater control of the game again after the interval, with Patchell's booming kicks and some fierce tackling pinning the hosts back.

But Glasgow were their own worst enemies as Ruaridh Jackson dropped the ball under no pressure, Seymour lost the ball in his own 22 after calling a mark and Stuart Hogg passed carelessly into touch.

Jackson spurned the chance to half the deficit when his tricky penalty attempt drifted wide and Halfpenny rubbed salt in the home wounds by knocking over an almost identical kick soon after.

Glasgow replaced the erratic Matawalu with Chris Cusiter for the final 12 minutes and the change at scrum-half paid dividends immediately.

A sequence of smart passes from the experienced Scotland international nudged the home team forward patiently and a lovely switch allowed prop Grant to bulldoze in under the posts, with Weir, on for Jackson, adding the extras.

Gauzere's handling of scrums caused consternation all night but the home fans were cheering when the Blues were penalised on 77 minutes, allowing Weir the chance to put Glasgow ahead but groans filled the stadium as the substitute could not split the posts from 40m.