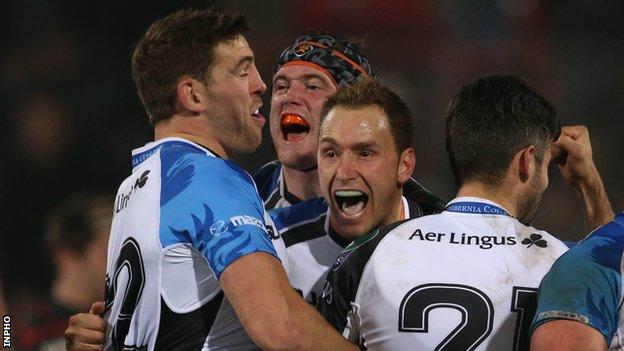 Connacht earned the most famous win in their history as they stunned Toulouse in Sunday's Heineken Cup Pool 3 clash.

Dan Parks kicked six first-half points to put Connacht ahead but Jean-Pascal Barraque's try and conversion just before the break put Toulouse 7-6 up.

However, another Parks penalty was then followed by a try by the superb Kieran Marmion which the Scot converted.

Thierry Dusautoir's try, converted by Lionel Beauxis, left only two between the teams but Connacht held on.

The shock win keeps Connacht in contention for qualification from Pool Three as they move to within one point of the joint table-toppers Saracens and the French club.

Connacht went into the game after four straight defeats - including last weekend's 43-10 Pro12 mauling by Edinburgh which led to coach Pat Lam apologising to the club's supporters for an "unacceptable display".

Toulouse were unbeaten in the Heineken Cup at the Stade Ernest Wallon for five years and the Irish province were also up against a club whose reputed £25m-plus player budget is reckoned to be more than 10 times greater than Lam's squad.

But despite their poor recent form, the Pro12's current basement club showed great initial resolve as they withstood an early barrage of running rugby from the French giants.

Hosea Gear looked set to run in an immediate try only for the outstanding Marmion to snatch the wing's inside pass to avert the danger.

Connacht's first attack of note yielded a penalty which Parks slotted from just short of halfway.

After more disciplined defending, Connacht produced another charge into Toulouse territory in the 15th minute which resulted in ex-Scotland fly-half Park plundering a drop goal.

More composed defending appeared set to keep Toulouse scoreless by the break but right on the stroke of half-time, Barraque ran from the edge of the 22 to score after evading attempted tackles from Mick Kearney and Robbie Henshaw.

With Barraque adding the conversion, the score appeared a hammer blow for the Irish side but they regrouped magnificently after the break to take control of the contest.

Parks nudged Connacht back into the lead with a 45th-minute penalty and the visitors were scenting one of the most remarkable wins in Heineken Cup history two minutes later when Marmion scored his try after brilliant runs by Ireland international Henshaw and Fionn Carr.

Connacht fly-half Parks added the conversion to increase his team's lead to 16-7 and the lead remained at nine as Barrque missed a straightforward penalty.

The Irish side looked to have almost put the game to bed in the 53rd minute after Henshaw appeared to have run in a breakaway try but the referee controversially called play back for a Connacht scrum on the edge of their own 22.

Inevitably, Toulouse did produce late pressure and Dusautoir rumbled over for a 70th-minute try with replacement fly-half Beauxis adding the conversion to cut the margin to only two.

Parks missed a drop goal chance which would have given the visitors some late breathing space but Toulouse's final attack in injury-time never really built up a head of steam as Connacht celebrated their shock success.

The sides meet again in Galway next Saturday.