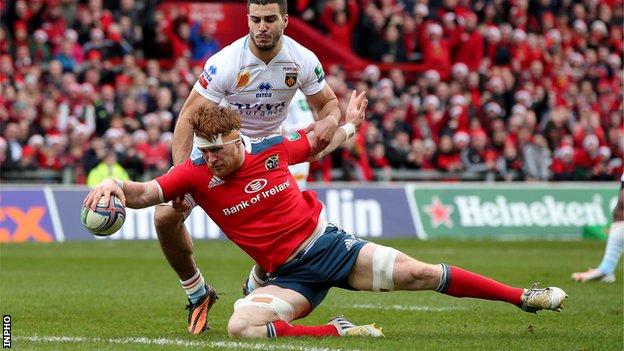 Munster moved to the top of their Heineken Cup pool as they grafted to a bonus-point win over a lacklustre Perpignan side at Thomond Park.

A penalty try secured Munster's bonus point on 66 minutes with James Coughlan adding a touchdown before Joffrey Michel's late reply for the visitors.

A worry for Munster was a knee injury picked up by Conor Murray.

Lions scrum-half Murray had looked in impressive form before having to hobble off in the 18th minute and his fitness for next weekend's return game in France and further Munster upcoming contests could be in doubt.

Munster produced spells of impressive play in the first half although Perpignan wasted a couple of try-scoring opportunities in the opening period after mistakes by the home side.

The home side lost their way somewhat after the break before forward pressure eventually sealed the vital bonus point in what is shaping up to be a tight pool.

Going into the contest, Perpignan were not fancied to become the first ever French side to win a Heineken Cup game at Thomond Park.

And they got off to the worst possible start as a poor Hook kick allowed Johne Murphy to go on a charge, produce an exchange of passes with Murray, before setting up a stretching Dougall to score a third-minute try.

However, there was Munster sloppiness in the first period as Sebastien Taofifenua knocked on just short of the home line when a Perpignan try looked.

With the scoreline still 10-0, Murphy then needed to win a foot-race to prevent a breakaway Perpignan try after Munster had spilled the ball in midfield on the edge of the opposition's 22.

However, Munster were continuing to show ambition as Kilcoyne barged his way over for their second try and Keatley had twice turned down the option of a simple three points.

A turnover in the Munster half then gifted Earls his 35th-minute try although he showed impressive speed to run from near his own team's halfway line after a combination of Paul O'Connell and replacement scrum-half Cathal Sheridan had pinched possession.

Hook's penalty opened Perpignan's account after the restart which cut Munster's lead to 22-3.

Perpignan briefly threatened to fight back into the contest and they appeared unfortunate to have a Sofiane Guitoune try ruled out after Luke Charteris had been adjudged to have thrown a forward pass following Dougall's brave last-ditch tackle.

After a sloppy third quarter, Munster finally secured the bonus point with their penalty try on 66 minute when Perpignan replacement Kisi Pulu failed to roll away as the home side produced intense pressure.

It was then the turn of Earls to have an effort ruled out for a forward pass before Coughlan barged over for Munster's fifth try on 76 minutes.

Right at the death, Michel ran in a Perpignan try but the French side will surely be looking for much, more better in next weekend's clash.