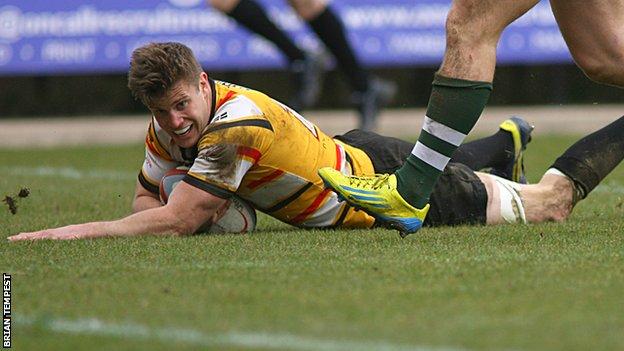 Cornish Pirates scored two late tries to beat Jersey 31-20 and open up a commanding lead in their British and Irish Cup group.

Two scores in two minutes from James Phillips and Kyle Moyle put Pirates in control but a penalty-try helped close the gap to 14-13 at half-time.

Jersey edged ahead late on with another penalty-try after multiple scrum resets.

But the hosts hit back with Matt Evans and Darren Barry going over at the end.

It rubbed salt into the Jersey wounds at the conclusion of a challenging week which had seen after defeat by the Championship's bottom club Ealing.

"To come down here and get close to a win is a big positive - I don't think the score really reflects the game."

Pirates remain top of Pool Six with three bonus-point wins from three putting them in a strong position to qualify, while Jersey stay in second spot at the half-way point in the group stage.

"The boys showed fantastic character," reflected Pirates head coach Ian Davies. "Going into injury time I thought a draw would have been nice. To pick up a bonus-point win is fabulous."

The win was revenge for the defeat to the islanders just three weeks earlier, when Niall O'Connor's penalty with the last kick of the game gave Jersey a 27-25 win at St Peter.