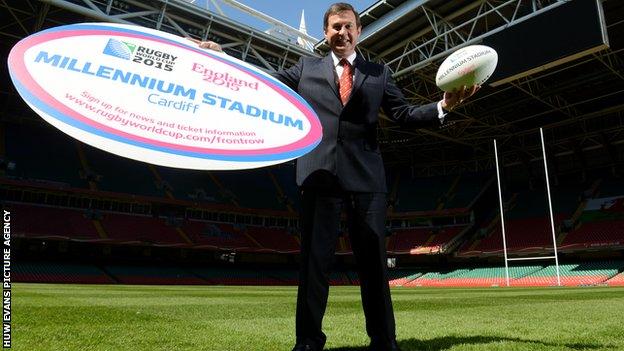 The Welsh Rugby Union is hoping to install a new hybrid pitch at the Millennium Stadium next summer.

"The Desso would take us to another level as a world-class rugby stadium and multi-event arena," said Mr Lewis.

The Union is now seeking financial support for the project.

Since the Millennium Stadium opened in 1999 there have been problems with the surface.

At present, the pitch is grown elsewhere before being moved to the stadium and laid on pallets.

The surface had to be replaced in 2009 because of a fly infestation which caused damage to root growth.

Wales and British and Irish Lions full-back Leigh Halfpenny spoke out about the condition of the stadium's playing surface after they were beaten by New Zealand in 2009.

The Desso system, favoured by the WRU, intertwines grass turf with millions of artificial fibres.

Unlike the fully artificial surface at Cardiff Arms Park, the Desso system is approved by Fifa and Uefa for football matches.

The potential £3.3m investment would also include a Terraplas cover to protect the new surface when non-rugby events such as rock concerts take place at the stadium.

"Desso is a tried and tested pitch system which we expect would answer all our requirements for international rugby," said Mr Lewis, "including the 2015 Rugby World Cup which brings eight games to the Millennium Stadium.

"In our search for the best possible surface we took advice from a range of experts and ensured we listened to the voices of our players, coaches and conditioners before deciding which option to choose."