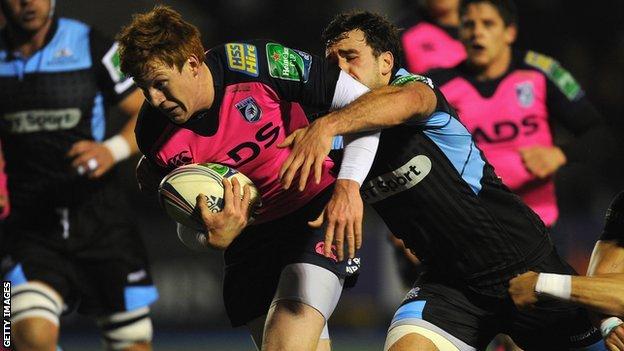 Cardiff Blues maintained their challenge for a Heineken Cup knock-out place with victory over Glasgow in a pulsating encounter at the Arms Park.

Leigh Halfpenny and Rhys Patchell kicked penalties before the latter's try and former's conversion and penalty put the Blues 16-0 up.

However, when they look back on this contest the hosts will recall the outstanding defence that underpinned their efforts.

Glasgow lived up to their reputation for dynamic attacking play, but the battle of the gain line belonged to Phil Davies' Blues.

The rivals, who know each other well from the Pro12 were tied on five points each at the bottom of Pool 2 as they took the field.

And in the second of the back-to-back games, this time at Glasgow on Friday, 13 December, they face each other again in what promises to be another compelling contest.

On this occasion, the Welsh region were top that table, but Toulon and Exeter face each other in the group's other third-round game on Saturday.

Blues boss Davies made eight starting changes and also had to contend with the return of some of their Wales stars a week later than Glasgow's autumn Test players were back on club duty.

The visitors also made a raft of changes - nine to the line-up that beat Ospreys in Swansea the previous weekend in the Pro12.

But Blues belied the short preparation time at their disposal to take a 13-0 lead after 22 minutes.

Halfpenny missed an early angled shot before putting his side on the scoreboard.

Patchell added another penalty from inside his own half amid some outstanding home defence, the hosts showed their attacking ability with a well-worked try finished off by the fledgling Wales fly-half.

Alex Cuthbert was heavily involved out wide and as a close-quarter ball-carrier before the ball reached the imposing figure of Patchell.

Centre Alex Dunbar and scrum-half Nico Matawalu lay it wait, but Patchell drove through their attempted block to touch down.

Halfpenny converted and, after Blues defence was again to the fore, added a 32nd-minute penalty.

Glasgow's battling qualities shone through led to wing Sean Maitland finishing off his run to the line by cutting past fellow 2013 British and Irish Lions tourist Halfpenny to score.

Weir converted and he and Halfpenny exchanged penalties after the break.

The Scottish fly-half kicked his side to within a converted try of winning after a Dafydd Hewett's high tackle.

But Halfpenny again put the Blues nine points clear and as Glasgow sought to hit back, Cuthbert intercepted inside his own 22 before fending off Ruaridh Jackson.

Halfpenny added the conversion and the home defence again proved equal to Glasgow's attempt to make their mark as Matawalu and Leone Nakarawa combined.

Nakarawa was not to be denied two minutes from the end as he stretched over and Weir converted to leave Glasgow within a score of a bonus point.