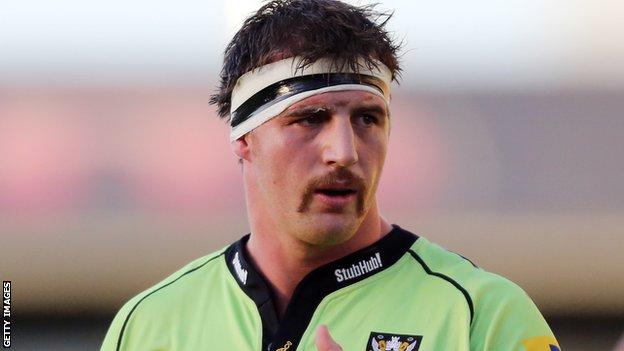 Northampton Saints flanker Tom Wood has said the Heineken Cup final defeat by Leinster in 2011 could provide "extra motivation" for his side on Saturday.

But, inspired by Jonathan Sexton, Leinster overturned that deficit to win 33-22.

"I guess we'll keep it in the here and now. But if we can draw on a little extra motivation, I'm sure a couple of boys will still be feeling it."

The two sides lead the way in the group, with Leinster top after two wins from two and Saints three points adrift.

The 2011 final at the Millennium Stadium in Cardiff was remembered for Leinster's remarkable comeback, overturning a half-time score of 22-6 to run out eventual winners.

It was England forward Wood's first full season at Franklin's Gardens, but the 27-year-old was forced to watch from the stands after suffering a hairline leg fracture.

"It's been on my mind a bit. I didn't even play in the game and it hurt me. It doesn't sit particularly well," he said.

"It's something I'll remember for a long time. I was in the crowd, going through the rollercoaster of being so high at half-time, thinking 'we can't lose it from here'. Then I saw it fall apart in front of my eyes."