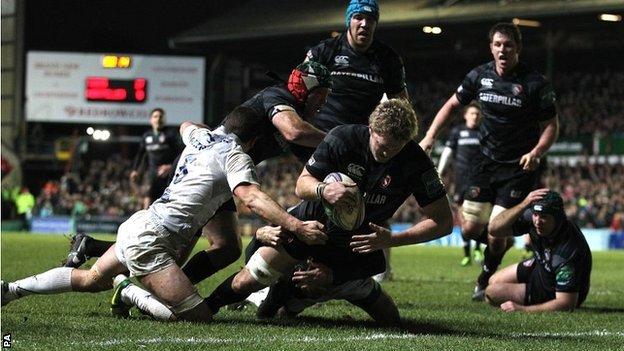 Leicester saw off a spirited Montpellier side to secure a bonus-point victory in the Heineken Cup.

The Tigers raced into a 24-3 lead after 15 minutes with Niki Goneva carving through before winger Miles Benjamin twice scampered over.

But the French side came back as Mamuka Gorgodze showed good pace to score and Timoci Nagusa was given room out wide.

Ryan Lamb's drop-goal with the final kick of the match denied Montpellier a second losing bonus by extending the winning margin beyond seven points and the result may be fatal to the visitors' hopes of progressing beyond the group stages.

Leicester are now two points of Pool 5 leaders Ulster and six ahead of Montpellier, who may put out a weakened team for the Tigers' visit next weekend as they prepare to travel to Toulon in the Top 14 on 21 December.

Leicester came into the game on the back of four successive victories domestically and were into their stride after just four minutes.

Goneva had missed the previous seven weeks through injury, but showed that he had lost none of his power or pace as he cut inside Rene Ranger before curving his run in the opposite direction to go around floundering scrum-half Jonathan Pelissie.

The Leicester blitz continued with Miles Benjamin scoring his first tries since returning from 13 months out with a serious neck injury.

The former Worcester man was mobbed by his team-mates after weaved through some half-hearted Montpellier tackling for his first and his second arrived straight from the restart as Graham Kitchener gathered and Scott Hamilton and Goneva released him into the corner.

At 24-3 up with just 15 minutes gone, it seemed that Leicester's pursuit of a winning bonus point and the eventual margin of victory were the only remaining points of interest.

But Montpellier roused themselves to make it into a contest.

First Georgia international Gorgodze cantered in after former Glasgow man Johnnie Beattie had pounced on turnover ball to catch the Tigers on the hop.

Back in the wing of things

Miles Benjamin's tries were his first for the Leicester first team since he joined from London Irish at the start of the 2012-13 season. The England Saxon missed nearly 13 months of action after injuring his neck in a game for the A team against Northampton in September 2012 and only made his senior debut for the club against Ulster in October this year.

The French side punished their hosts' wastefulness as Ranger's pacy break scattered their defence and Timoci Nagusa strolled in unchallenged as play swung across to the opposite flank.

After a free-scoring first half, the second proved a tighter affair with both sides aware of the value of the next score.

Montpellier threatened to make further inroads into Leicester's six-point lead with Pelissie narrowly missing a penalty before Adam Thompstone had to rush back to deny Anthony Floch.

But Leicester, with Kitchener continuing to impress at lock, gradually penned Montpellier back and after a Flood penalty had given them extra breathing space, Gibson dived over after the visitors' scrum had been forced to backpedal.

Flood slotted another penalty to make it 35-18, but Montpellier still refused to fold out of the game and replacement Pierre Berard ran in under the posts a minute later following Nagusa's breakaway.

Nagusa himself was over the line shortly after but Leicester were saved as the video referee ruled that Pelissie's final pass had crept forward.

Instead a long-range penalty from Flood pushed the home side's lead out to 13 points and Lamb, after he had dithered too long on a clearance kick to allow Berard another score at one end, dropped a goal at the other to end the match on a happy note for Leicester.

"There were probably five or six tries left out there from both sides. We need to be more accurate.

"We needed the five points and that was good for us. It keeps the pressure on Ulster but they're in the box seat. We've got to win next week at Montpellier really."