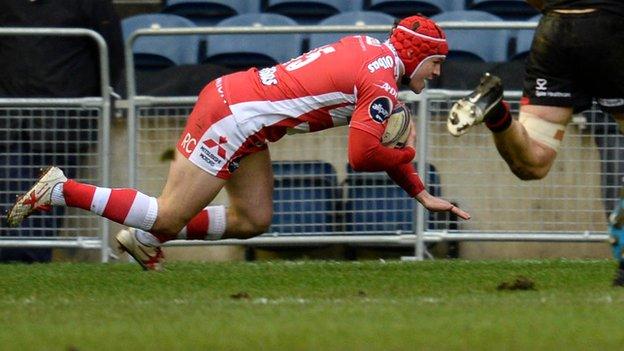 Dynamic Gloucester eased to victory over a lacklustre Edinburgh at Murrayfield to boost their hopes of qualifying from Heineken Cup Pool 6.

The home side got off to a whirlwind start, with Greig Tonks danced in for the opening try after six minutes.

Rob Cook cancelled that out at the other end and Martyn Thomas added tries either side of the break, with Freddie Burns kicking the other points.

But it could not prevent a Gloucester victory that lifts the visitors into second behind Munster, who swept aside Perpignan in Ireland, with two wins each after three games.

It was an unhappy 100th appearance in the Heineken Cup for Edinburgh, who had gone into the game looking for a fifth straight home victory.

Gloucester, though, showing five changes from their home defeat by Leicester Tigers that left them third bottom of the English Premiership, looked inspired under stand-in captain Billy Twelvetrees in the absence of the injured Tom Savage.

And they looked untroubled by a six-hour coach journey north resulting from a delayed flight because of weather conditions.

Edinburgh had themselves suffered a pre-match blow, with Scotland hooker Ross Ford failing a fitness test.

Ford had been due to start ahead of Aleki Lutui in one of only two changes from the side that defeated Connacht in the Pro12.

However, the home side were quickly on the front foot on the tricky Murrayfield surface and a flowing move involving Denton and Cornell Du Preez led to Tonks sliding in at the corner.

Laidlaw failed with the conversion and Gloucester were level almost immediately when full-back Cook superbly ran on to Henry Trinder's kick over a flat home defence.

Burns' conversion slipped wide, but he made up for that with a penalty that quickly followed as Gloucester took heart from their opening try.

The visitors were on fire and their quick ball had Edinburgh's defence all at sea as Cook's clever reverse pass allowed winger Thomas to gallop over for a try that was converted this time by Burns.

There was to be no let-up for the Scottish side after the break as winger Jonny May went on a superb 50-yard run after pouncing on a poor kick from Harry Leonard before setting up Thomas for his second try.

Burns failed with the conversion attempt, which appeared to give Edinburgh some heart and loose forward Denton pushed over for their second try after their first period of pressure since their opener, with Laidlaw converting.

Gloucester lock James Hudson was sent to the sin bin for a barge with 20 minutes remaining, but determined defence from the visitors prevented Edinburgh taking advantage and the error-prone hosts' hopes of a comeback disappeared.

It leaves Edinburgh, now bottom of Pool 6, needing to reverse the scoreline in the return game at Kingsholm to keep alive their hopes of Heineken Cup qualification.

Edinburgh head coach Alan Solomons: "It wasn't our best performance and we lacked sharpness and urgency.

"We made mistakes for the three tries they scored and then, when they had a man sin-binned, we had a chance to score but didn't take it.

"That was the pivotal point in the game that could have changed the entire complexion of the match."

Gloucester coach Nigel Davies: "It was a great try set up by Jonny May. We have been disappointed with our performances this season, but to score a try like that will help our confidence.

"You can't coach that sort of thing, but what you can coach is how you set up opportunities like that.

"If that is one of your strengths then you have to give your team chances.

"But, in terms of what Jonny does when he gets the ball, I think the only one who know what he was going to do was Martyn Thomas, who came in for a short ball. Everyone else was completely confused by him, including me."