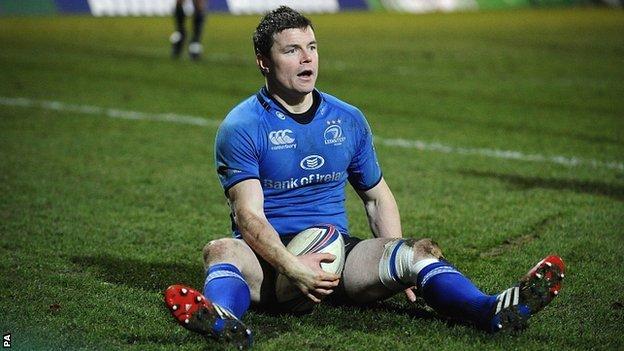 Northampton's hopes of qualifying for the quarter-finals of the Heineken Cup look slim after they were thumped by Leinster at Franklin's Gardens.

Winger Luke Fitzgerald scored a hat-trick of tries for the Irish side while Jamie Heaslip, Eoin Reddan and Brian O'Driscoll also crossed.

Lee Dickson scored a consolation try but Saints fans will be fearing the return fixture in Dublin next week.

Northampton are third in Pool One, eight points behind leaders Leinster.

Leinster, whose squad contained 14 players involved in Ireland's close defeat by the All Blacks a fortnight ago, are unbeaten in their last 10 matches against English sides.

Saints were delivered a setback in the warm-up when full-back James Wilson withdrew injured, forcing wing Ken Pisi to fill the void.

Pisi contributed to two of Leinster's tries as the three-time European champions made a blistering start.

Man-of-the-match O'Driscoll created two tries for Fitzgerald inside the opening eight minutes, the first arriving after Pisi dropped the kick-off.

From the resulting scrum O'Driscoll grubbered through for Fitzgerald to touch down with only 150 seconds on the clock.

Better was to come from O'Driscoll in the eighth minute when he passed between his legs to Kearney, who sent Fitzgerald side-stepping over.

In the 25th minute, Sean O'Brien bulldozed his way upfield and when the ball was sent right, Kearney shrugged off some weak defending before putting his captain Heaslip over in the corner.

The try-scoring bonus point was secured with four minutes of the first half remaining, Kearney snatching a high ball from Pisi's grasp and Reddan skipping over a few drives later.

The fifth try came when Northampton sought to break from deep inside their own half and O'Driscoll intercepted a pass by Dom Waldouck and raced over.

England scrum-half Dickson barged over from close range for his side's only try, but Leinster replied with their sixth try when Fitzgerald tracked Zane Kirchner's break and took an easy scoring pass.

The 33-point margin equalled Northampton's previous biggest defeat in Europe, against Clermont in 2001-02.

"It was embarrassing really. We didn't start the game well and conceded two early tries - we never really recovered.

"James Wilson tweaked his calf with two minutes left of the warm-up. We thought we needed a bit of pace in the back three and so we went for Ken Pisi [at full-back]

"It's a disruption but we should be better.

"It was a fantastic team performance by then and they are a class team but we were really poor. That's the upsetting thing."