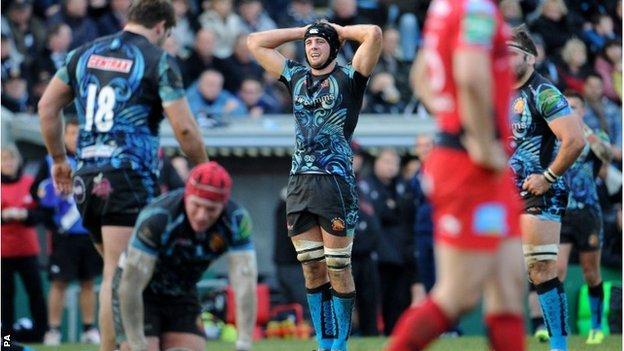 Defending champions Toulon overturned a half-time deficit to secure a narrow win over a brave Exeter side and take top spot in Heineken Cup Pool 2.

A barrelling run from Florian Fresia put the holders ahead, but penalties from Gareth Steenson (two) and Henry Slade gave Exeter a 9-8 interval lead.

Wilkinson swept over a drop-goal before his side ground out the final minutes.

Exeter were committed in defence, exemplified by Jack Nowell's try-saving tackle on Rudi Wolf, and ran the ball gamely as they chased the game late on. But ultimately they lacked the quality to wrestle the match away from their expensively assembled opponents.

After defeat by Cardiff last time out in the competition and a 23-0 reverse against Stade Francais in the Top 14 last weekend, Toulon named a star-studded line-up that included the likes of Bryan Habana, Bakkies Botha, Mathieu Bastareaud, Drew Mitchell and Giteau alongside Wilkinson.

But Exeter did not look overawed by the illustrious visitors, and Steenson's boot put them on the board first.

Toulon's threat with ball in hand from all parts of the field briefly emerged when former All Blacks second row Ali Williams's deft flicked pass allowed prop Fresia to barge over.

But the French side were short of their usual fluency, and basic errors prevented them converting territory into points.

Despite the loss of Steenson to injury, Exeter remained efficient in taking their chances and 20-year-old replacement Slade made it three successful kicks from three to ensure the hosts headed back to the changing room with a 9-8 lead.

Twice after the break Wilkinson failed to land ambitious shots on goal to regain the lead, as diligent Exeter defence repelled waves of Toulon runners.

Wilkinson sent another, far easier, opportunity floating wide to spare Exeter's one-point lead once again and suffered the indignity of being demoted from kicking duty when another kickable penalty was awarded his side's way

After the home crowd mockingly chanted their preference for the 2003 World Cup winner, Giteau put Toulon back in front.

Wilkinson had the last laugh on the Exeter fans when, after a total of four failures from five attempts off the tee, he knocked over a drop-goal and then locked over the tackled man to win possession back in the last play of the game.