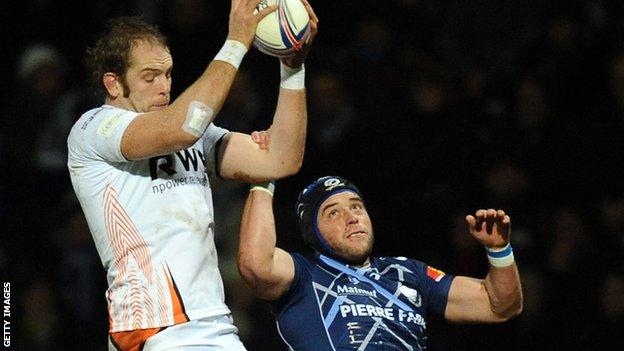 Ospreys slipped to their third successive defeat in Pool One of the Heineken Cup in spite of a colossal defensive display in Castres.

The French champions battered the Welsh region, but could not cross the try line with Alun Wyn Jones outstanding.

And the Ospreys almost claimed an unlikely victory in a breathless finale with Castres reduced to 13 men.

But penalties by Rory Kockott (4) and Geoffrey Palis were enough to eclipse three kicks by Dan Biggar.

The result leaves the Welsh region rooted to the bottom of the table with just one losing bonus point to show for their efforts following earlier defeats by Leinster and Northampton Saints.

But this performance did not lack for spirit or courage in a bruising, compelling match at the Stade Pierre Antoine.

After reaching the interval all square at 6-6, Castres took complete control in the second half.

They dominated possession and territory, pinning the Ospreys in their own 22 for long periods.

But they met a solid wall of white with second row Jones directing proceedings and the young centre pairing of Tom Isaacs and Ben John outstanding.

They were helped by Castres' lack of composure at key moments with centre Paul Bonnefond twice dropping the ball in promising attacking positions.

Hooker Marc-Antoine Rallier was also guilty of profligacy as he kicked the ball away in a wide on the left, with visiting scrum-half Rhys Webb gratefully clearing the lines.

All Castres had to show for their dominance going into the final 10 minutes were two additional Kockott penalties and when Biggar added his third in the 72nd minute the Ospreys sniffed an unlikely victory.

A penalty for replacement Palis from in front of the posts seemed to finally settle things, but the Ospreys made one final desperate throw of the dice.

With 80 minutes up, they attacked deep into the home 22 with Issacs making it to within a metre of the try line.

Palis was shown a yellow card for killing the ball and Seremaia Baikeinuku followed him as referee Peter Fitzsgibbons lost patience and the game was briefly held up by a small crowd invasion.

Drives by Jones and Richard Hibbard were stopped just short of the line as Castres' 13 remaining players scrambled in defence.

And the Ospreys final chance went begging when they were penalised at a ruck.

The teams meet again at the Liberty Stadium on Friday, 13 December.