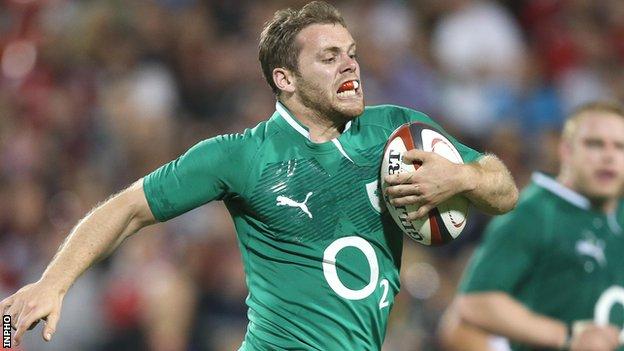 Ulster centre Darren Cave believes the reason he has won just five Ireland caps in four years could be because his "face doesn't fit".

Cave was left out of Ireland's squad for the November internationals.

"Unfortunately for me, internationally, the last few years haven't gone that well and sometimes you wonder 'does the face not fit?'" said the 26-year-old.

"I totally understand his frustration - his challenge is to get selected," responded Irish coach Joe Schmidt.

"If you don't know what I mean ask Roger Wilson how he's one cap and Jamie Heaslip has 60 and two Lions tours," Cave had commented.

Cave won the Grand Slam with Ireland's Under-20s in 2007 before making his senior Ireland debut against Canada in 2009.

Despite being a consistent performer for Ulster he has failed to establish himself in the Ireland set-up.

"I don't know how these people see that, as I've never really had a good crack at it.

"I suppose it's all motivation for me [for me]. I'm actually a big fan of Joe Schmidt even though I don't know if he's a big fan of me.

"He's an incredibly likeable person and he really knows his rugby, which means my non-selection is a bit harder."

Cave contacted Schmidt on Thursday morning to clarify his comments, and the Irish coach has not closed a door on a return for the Ulsterman.

"He rang me and and he feels he has good clarity about what we are looking from him," said Schmidt.

"His frustration will push him to work as hard as he can, as he is a positive fella. There is no personal animosity there.

"The Heineken Cup games, especially against Leicester and Montpellier, give him the chance to put his best foot forward for selection.

"I like him as a character, he's a smart rugby player and he's a good guy to have in camp."