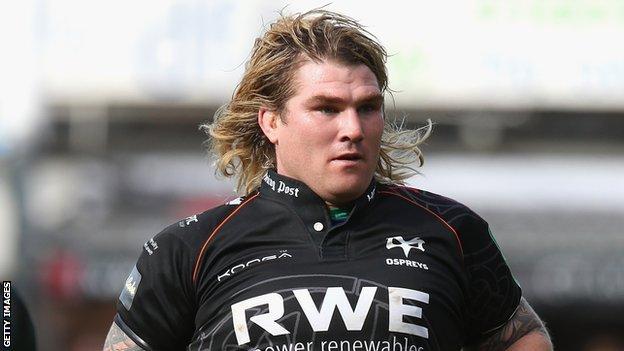 Ospreys hooker Richard Hibbard has complained about the lack of funding in Welsh rugby after agreeing to sign for Gloucester for next season.

Hibbard is the latest Welshman to exit a regional team at an uncertain time for the professional game in Wales.

"I'm absolutely gutted to be leaving my home region, where I've been all my career," he told the Ospreys website.

"It's unfortunate that there isn't the funding to allow boys who want to play in Wales to stay in Wales."

Hibbard's comments come in the wake of the four Welsh rugby regions calling for an independent public inquiry into how the Welsh Rugby Union negotiates and allocates broadcasting and competition revenue.

The 30-year-old, who played for the Lions in their series win over Australia, added: "It was always going to be a tough decision to leave my home area, as I'm currently in my 10th successive season at the Ospreys, which is my local region and where I was born."

Hibbard made his international debut for Wales against Argentina in 2006 and played four times in this year's RBS Six Nations before featuring in all three Tests for the Lions in Australia.

Hibbard signed a five-year deal in 2010 and has since established himself as Wales' first-choice hooker.

He will join Wales lock Ian Evans (Toulon) and Scarlets centre Jonathan Davies (Clermont Auvergne) and a host of Test stars in exile next season.

In England's Premiership, Wales wing George North plays for Northampton, props Paul James and Rhys Gill are at Bath and Saracens respectively, and Exeter have another Wales prop in Craig Mitchell and wing Tom James.

Two more Ospreys forwards who are also Lions and Wales caps - lock Alun Wyn Jones and prop Adam Jones - are out of contract at the end of the 2013-14 season and are also the subject of speculation over their futures.

The open-side's contract expires this summer and Warburton had set a deadline to sort out his contract.

Halfpenny has been linked with a move to Toulon or Clermont.