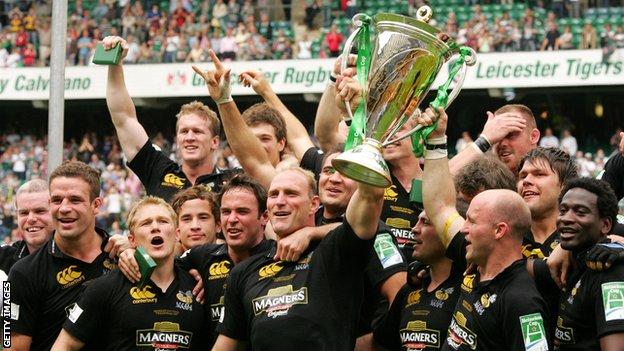 England's top-flight clubs have reiterated that they will not take part in the Heineken Cup next season, even though the decision leaves them seemingly isolated in Europe.

English and French clubs gave notice 17 months ago that they would leave and form a breakaway competition.

But last week French teams committed to the current tournament - as long as their English counterparts also did.

Premiership Rugby said it was looking at a "number of other options".

The governing body's chairman Quentin Smith told BBC Radio 5 live those options included "expanding domestic competitions and looking at things we can do in our own jurisdiction, and playing countries and other clubs in the northern and southern hemisphere".

He added: "There isn't anybody who doesn't want to play the English clubs in the Premiership. Now it's a question as to how that will be managed."

Each of the six countries on the European Rugby Cup board has two seats.

Disagreements about the Heineken Cup's qualification criteria, voting structure, income distribution and future television rights are the reasons behind the proposed breakaway, which is called the Rugby Champions Cup.

Premiership Rugby - the umbrella organisation for England's biggest clubs - has always insisted that from next season English clubs will not take part in any tournament organised by European Rugby Cup (ERC), which runs both the Heineken Cup and second-tier Amlin Challenge Cup.

And on Thursday it confirmed that stance after a meeting sparked by the French clubs' decision to take part in next year's Heineken Cup.

"The current structure of ERC is unfair, unmeritocratic and unbalanced competition," said Smith.

"That's due to the way the clubs qualify for the competition, the distribution of revenues and the seedings which are determined by performance solely in that competition in previous years and not the way clubs are performing in the current season."

Smith added that the English clubs are unanimously behind the decision to not take part in the Heineken Cup and the RFU "are content".

When asked if there was a timeframe for finding a solution, Smith added: "The timeframe is short.

"We had hoped we would have been in a more defined position by now," he said. "We thought we were there with the Rugby Champions Cup as a result of agreement we reached on 22 October.

"That has unravelled somewhat. There is only one piece in jigsaw which is creating a problem, and that's the issue of governance. Everything else is agreed upon."

All Pro12 clubs - from Wales, Scotland, Ireland and Italy - were invited to join the initial Anglo-French breakaway competition.

The Scottish, Irish and Italian clubs remain committed to the Heineken Cup, while the Welsh Rugby Union also wants its teams to stay in the competition.

However, Regional Rugby Wales, which oversees the four regions, has expressed an interest in the breakaway tournament.

The Heineken Cup is in its 20th season, with a new structure proposed for next year's tournament.

The number of participating teams will be cut to 20 from 24 and revenues will be split evenly between the three leagues - the English Premiership, France's Top 14 and the Pro12 - should teams from all three competitions take part.