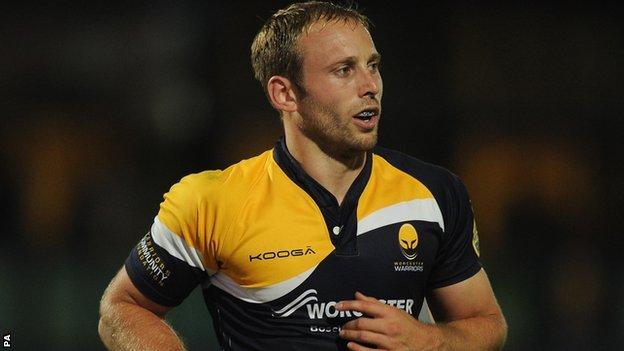 Worcester Warriors full-back Chris Pennell has signed a new deal with the Premiership club until June 2017.

The 26-year-old, who came through the Warrriors academy, is the longest-serving player at Sixways.

"I'm confident that success is just around the corner for us and I want to be a part of that," he said.

I know this news will be welcomed by his team-mates, supporters and everyone associated with the Warriors

"The fact that I'm improving as a player is credit to the coaching set-up and I'm excited about the prospect of developing further here."

Pennell captained Worcester's promotion-winning team in 2010-11 and has represented England at Under-19 level.

Director of rugby Dean Ryan said: "This announcement comes as a statement of our long-term intentions and illustrates that our top players are buying into the vision.

"Chris has had a huge impact on the team this season and I am delighted that he has chosen to be part of this club for years to come.

"Not only has he shown tremendous commitment on the field, but his desire to stay with the Warriors until at least 2017 clearly demonstrates a passion to succeed at the club in which he began his career.

"I know this news will be welcomed by his team-mates, supporters and everyone associated with the Warriors."