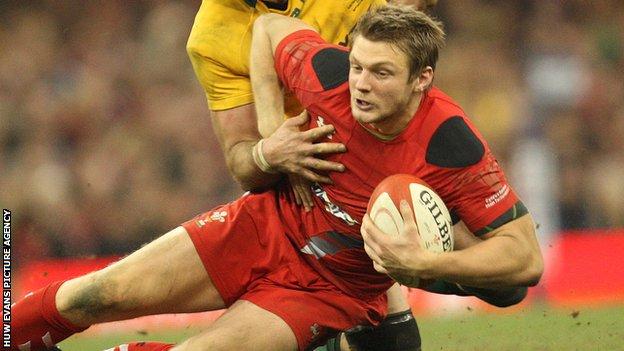 Ospreys fly-half Dan Biggar says he has no intention of joining the exodus of Welsh players to France and England.

Biggar's team-mate Ian Evans recently confirmed he had signed for Toulon while hooker Richard Hibbard is being linked with Gloucester.

The 24-year-old turned down an offer from Racing Metro last season and insists he is still happy to stay.

The four Welsh professional regions have been hit by a series of high-profile departures in the past year.

Evans' decision to sign for a French club follows from Scarlets centre Jonathan Davies's announcement that he has signed for Clermont Auvergne in France.

Current British and Irish Lions George North, Jamie Roberts and Dan Lydiate all left the Welsh regions at the end of the 2012-13 season.

Former Ospreys scrum-half Mike Phillips announced he had signed a new two-and-a-half year contract with Racing Metro a month after being sacked by Bayonne.

But Biggar, who started for Wales in their defeat against Australia on Saturday, says he does not intend to add his name to the list of Welsh internationals playing their club rugby abroad.

Biggar signed a new three-year contract to stay with the Ospreys in March after being linked with a lucrative move to Racing Metro.

"I was at a little bit of a different stage in my career. I was just 22 when I had an offer," said Biggar.

"Ian Evans is obviously coming up to 30 and your priorities change.

"He's just got a kid on the way and I think the first thing he has to be careful of is protecting his family.

"But like I said it was very different for me."