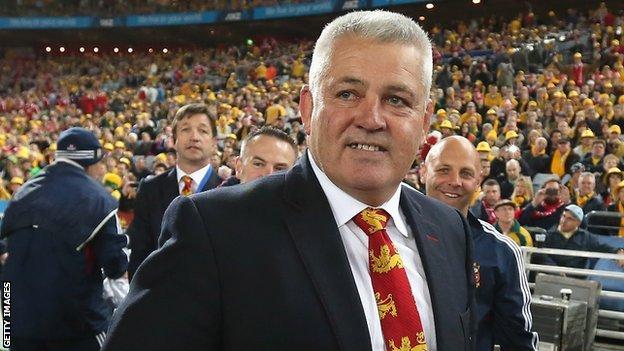 Wales and Lions coach Warren Gatland has been named UK coach of the year at the 2013 UK Coaching Awards.

Gatland, who also won high-performance coach of the year, led the British and Irish Lions to their first Test series win in Australia for 16 years.

"The sea of red and atmosphere in the stadiums is why you are involved in sport, to live for those moments and memories," he told BBC Radio 5 live.

The Kiwi, 50, reiterated his desire to lead the Lions to New Zealand in 2017.

Talking about his memorable year, he added: "It is tough to pick out a best moment, but you can't go past the Lions. It is nothing like you've experienced in the past."

With the Lions series poised at 1-1 down under after two nail-biting encounters, Gatland's men crushed the Wallabies in the final match as they racked up 41 points in Sydney to secure victory in style.

He admitted the reaction to that decision had shocked him.

"I knew it was a big call, but that is why I'm in that role.

"I said to the other coaches 'there will be a bit of a fall-out from this' and they should be prepared, but I wasn't prepared for the amount of fall-out, particularly in UK and Ireland.

"But that is sport and you have to stand by your beliefs."

The New Zealander admitted at the time that he wondered whether his role was worth the level of abuse he suffered, but he has hinted he might make himself available to lead the Lions against the All Blacks in 2017.

"My focus is on the next two years with Wales," he added. "If I do well with Wales in the Six Nations and World Cup then I will put myself in the frame to be asked again.

"If asked to do it again in my home country then it is something I would relish."

Gatland stepped aside from coaching Wales last year to concentrate on his Lions commitments. In his absence, interim coach Rob Howley led Wales to the Six Nations title.

With Gatland back at the helm for the 2014 campaign, Wales are targeting a hat-trick of Six Nations titles, a feat that has never been achieved.

He said: "Winning the Six Nations for a third year running will be incredibly tough. It is such a hard tournament to win because it is a tournament of momentum. If we get three-in a-row it will be something special."