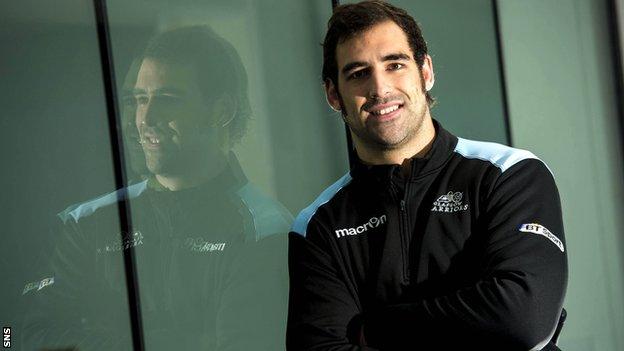 Josh Strauss believes successive wins over Cardiff would give Glasgow an excellent chance of reaching their first ever Heineken Cup quarter-final.

Gregor Townsend's men travel to Wales on Friday for the first of two Pool 2 matches against Phil Davies's side.

"If we can pull these two off, then we have a great opportunity to make the play-offs for the first time and that is one of our big goals this season."

The group is wide open, with each team having won one and lost one of their encounters.

Cardiff Blues have lost five Pro12 games this term, including the season opener at Scotstoun, but they stunned Toulon 19-15 on the weekend Glasgow ran out 20-16 winners against Exeter.

The Warriors, who sit third in the Pro12, began with a heavy defeat away to cup holders Toulon.

"We struggled in the first half of the first game," recalls Strauss. "But we came back in the second half and we proved ourselves again in the second match against Exeter when we played really well.

"We've been playing well in the Pro12 and we just need to keep that going.

It should be a good, fast game and I'm sure both teams will be looking to put on some good width

"Cardiff are a great team. They showed how physical they are up here at Scotstoun.

"Beating a team always gives you that mental edge but it was the first game of the season and maybe teams are a little rusty, so we don't want to look into that too much.

"They did really well to beat Toulon, that was a big upset and it proves how good a team they are."

Strauss got his first taste of European Cup rugby last season, with Glasgow winning just one of their six pool games.

And the South African says it is "a great honour" to play in the tournament.

"Growing up in the southern hemisphere, the teams you hear of are the ones in the Heineken Cup," he explained.

"It's one of the big things I look forward to."

Strauss is also relishing a good contest with the Blues forwards on the synthetic pitch at Cardiff Arms Park.

"The battle up front will be huge," he added. "The set-piece plays are massively important.

"It will be something new for most of us, playing on the 4G pitch, and I'm looking forward to it."

Fly-half Ruaridh Jackson is anticipating a quick-tempo match after training on Astroturf this week.

"You can really trust your footing," said the Scotland number 10. "It should be a good, fast game and I'm sure both teams will be looking to put on some good width.

"The aim is to get out of a tough group and if we get a couple of wins we put ourselves in a really strong position.

"We're in a good place, coming off the back of a good win at the Ospreys.

"Away wins are vital. We've been down to Wales a couple of times this season and come away with wins."

Meanwhile, Warriors have confirmed that Sean Lamont suffered ankle ligament damage but no fracture in the win at Ospreys.

The Scotland winger was stretchered off in Swansea and a statement read: "He will require a further review with the consultant at Spire Murrayfield over the next few weeks to determine the length of time he will remain on the sidelines for."