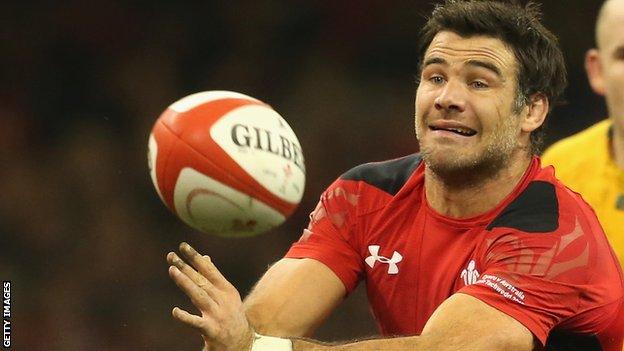 He was sacked by another French club, Bayonne, in October after allegedly turning up for a video analysis session under the influence of alcohol.

Last week Racing denied reports they had offered him a short-term deal.

"For a several months, Racing has been negotiating with Phillips and his agents with the aim of recruiting him for the 2014-15 season.

"The recent events in Bayonne have only precipitated his signature.

"A highly-experienced scrum-half who has won 80 caps for Wales and a further 11 for the British and Irish Lions, Phillips has signed for a period of two and a half years.

"He will join the club from tomorrow, Tuesday, and will be available for selection for this Saturday's Heineken Cup fixture against Harlequins in Nantes."

"Great first day in Paris, can't wait to start with my new club RacingMetro92 tomorrow. Looking forward to the next 2.5 years !" tweeted Phillips.

He joins Wales international Jamie Roberts and Dan Lydiate at the Paris-based club.

He is expected to make his debut for his club in the Heineken Cup game against Harlequins on Saturday.

Phillips provoked controversy after Wales' 30-26 loss to Australia on Saturday when replays highlighted him stamping on the hand of opposing fly-half Quade Cooper, but he has escaped disciplinary action.

The 31-year-old joined the Welsh squad for the autumn series following his sacking by Bayonne, a club he joined from the Ospreys in 2011.

Phillips, who had originally been under contract with the French Top 14 club until June 2014, said he was "disappointed and frustrated" by the club's decision.

The former Scarlets and Cardiff Blues player announced he is taking legal action against Bayonne.