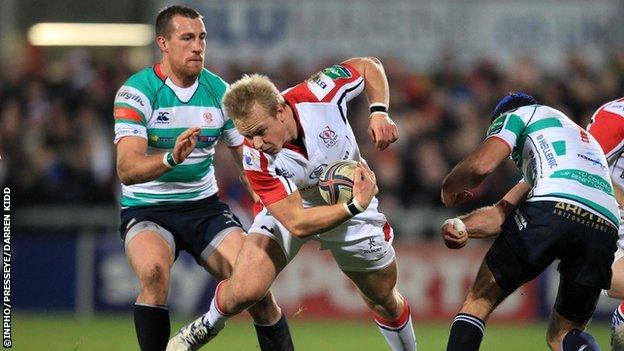 Ulster strengthened their position at the top of Heineken Cup Pool 5 by running in seven tries in a 48-0 demolition of Treviso at Ravenhill.

Jackson added a penalty and five conversions for the home side.

Ulster have accrued 13 points from three victories to date and face Treviso at Stadio Monigo next Saturday.

Irish fly-half Jackson got his side off to a flying start by going over for a try in the corner after five minutes on his 50th appearance for Ulster.

Centre Darren Cave played a pivotal role as the hosts put together multiple phases in the build-up to the opening score.

Jackson was unable to convert his own try but, along with Jared Payne, played a significant part in a wonderful sweeping move which led to Marshall touching down after 16 minutes, the number 10 adding the extras on this occasion.

Prop John Afoa then showed some nifty footwork and explosive power to brush off a tackle and take defender Tobias Botes over the line and under the posts for his first try on the European stage on the half hour mark.

Jackson's conversion and a penalty with the last action of the first half made it 22-0 as the sides headed to the dressing rooms.

Treviso enjoyed a spell of pressure at the start of the second period and a number of infringements at the breakdown by Ulster eventually led to centre Marshall being shown a yellow card for preventing the release of the ball following Mat Berquist's dangerous half-break near Ulster's line.

Tuohy secured the bonus point with Ulster's fourth try in the 60th minute, the second row linking up well with the impressive Cave, before diving over under the posts.

Cave's perfectly timed pass sent Trimble away to touch down in the right corner for his 22nd Heineken Cup try, but Jackson was off-target with his conversion attempt on this occasion, the ball hitting the upright.

Replacement David McIlwaine was instrumental in the final try of the game on 74 minutes, executing an inside pass to Jackson, who set up Marshall for his second score of the evening.

Jackson's conversion gave the final score-line a suitably convincing look and the Italians must now lift themselves for next week's return match between the sides.