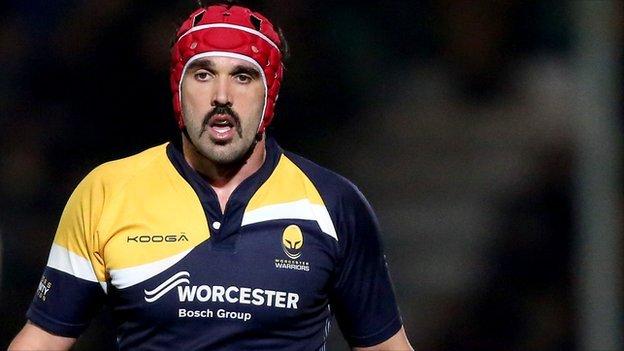 Worcester Warriors captain Jonathan Thomas says his side have the character to turn their season around and avoid relegation from the Premiership.

Warriors are without a league win this campaign and Saturday's 33-10 defeat at Sixways by Northampton left them firmly rooted to the bottom of the table.

"I believe we can turn it around," Thomas told BBC Hereford & Worcester.

"We've been in this situation for a few weeks but I believe in this group of players."

He continued: "We're not in a great position - everyone's aware of that but we're fighting as a team."

Worcester's defeat was their ninth of the current season and extended their winless run to 14 games, stretching back to last season.

Despite being 10 points adrift of London Irish - the nearest team above them - Thomas is convinced there are positives to build on from the Saints defeat.

"We need to work on our intensity for 80 minutes but I was proud of the team's effort," Thomas said.

"The scoreboard is obviously important and winning and losing is important but, as long as the structure of your game is sound, your luck will turn eventually.

"I think there's plenty to be positive about."

This season has proved an arduous one so far for the club's supporters, who were asked to show patience by new director of rugby Dean Ryan when he took charge in April 2013.

The new-look side has won just once in all competitions this season and last tasted victory in the Premiership on 1 March against Wasps.

However, Thomas believes success will eventually come with the foundations at the club now solid.

"We've got integrity as a group and have hard-working players and coaches and everyone wants to succeed," he added.