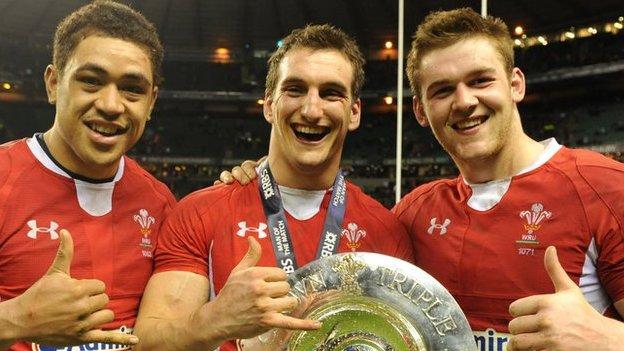 Wales have set their sights on making Six Nations history by winning a third successive title in 2014.

The ambition was set in the wake of their in Cardiff.

His back-row colleague Toby Faletau added: "If you can't get up for that then you shouldn't be playing."

Australia's win was their ninth successive triumph over Wales in five years, leading Warburton to state

In the meantime Warburton, the player who led the 2013 British and Irish Lions to a 2-1 Test series triumph in Australia, wants Wales to continue their northern hemisphere success.

That would mean beating the two successive titles England and France have recorded since Italy entered European rugby's elite Test tournament in 2000.

France have won five titles, with England and Wales each taking four while Ireland secured their only success in 2009.

"Our focus already turns to the Six Nations. No-one has won the Six Nations three years running, and that will be the target for this group of players moving forward," said Cardiff Blues open-side flanker Warburton.

Wales were unbeaten in their 2012 Grand Slam triumph and recovered from an opening 2013 defeat by Ireland in Cardiff to defend their crown.

However, they lost all four 2012 autumn Tests and finished even in the corresponding 2013 games with defeats by South Africa and the Wallabies and wins over Argentina and Tonga.

After defeat by the Springboks, Warburton and his team-mates aimed for three wins, but only truly impressed in the 40-6 triumph over the Pumas.

He added: "We have to look ahead to what is in front of us and try to defend our title.

"I don't think there has been a team to win three Six Nations titles in a row, and that is what we have to target.

"That is a motivation as we try to make history."

Faletau said the game against the Wallabies, who scored three tries to Wales' two "was a tough game, a really fast match".

He added: "They have a really good back-line, and you could just see what they did out there. They can strike from anywhere.

"It is frustrating because we have played them so many times and just lost.

"We just have to go back and look at the game and then see what happens when we come up against them again."