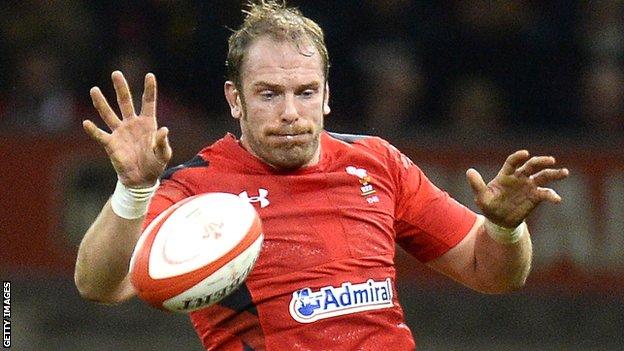 Alun Wyn Jones says Wales cannot afford to dwell on previous failures against Australia as they prepare for Saturday's Test in Cardiff.

Wales have lost eight successive games against Australia - including last-gasp defeats in their last three encounters.

Jones is one of only two survivors in Saturday's Wales team who played in the last victory over Australia in 2008.

"We realise we have been there or thereabouts, but that's not essentially good enough," said Ospreys lock Jones,

"We have faltered the last four times when Wales played Australia. At least three of those games we should have won, but the scoreline tells us different."

Jones captained the British and Irish Lions in their third Test triumph against Australia in Sydney in July, which sealed a 2-1 series win.

A win for Wales at the Millennium Stadium on Saturday would confirm their most successful autumn campaign since 2002.

"Yes, we've beaten them in the Welsh jersey before and we are perfectly capable of doing it - and we know we can do it," Jones added.

"There is obviously an opportunity to do that at the weekend.

"The danger of looking back [to 2008] is that we were at a different stage then.

"Warren Gatland had just come in, and possibly, it was a honeymoon period of a new coach and a new vibe in the side.

"Since then, we haven't won many autumn games in comparison to the number we've played.

"So we can look back and say 'yes, we've done it before'.

"But we would be cautious to go that far back because a lot of things have changed in the game, although you can also take a bit of heart out of it."

"If you want to enter into that, all the best. The best advice is to completely ignore [it] and concentrate on what we need to control."