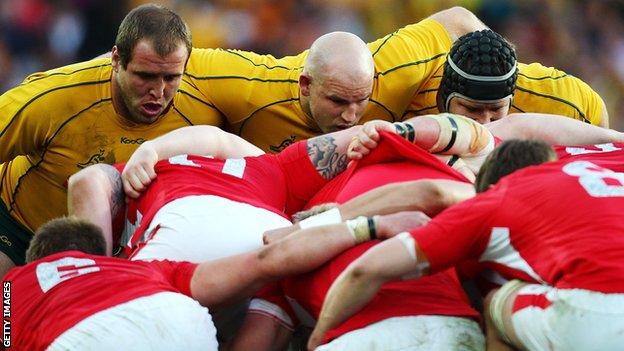 Traditionally scrummaging is not the Wallabies big strength and Wales are looking at targeting that area.

"You can take the statistics for what they are, but they have been penalised heavily at scrum," he said.

"In the last six games in particular - 28 times they have been penalised in the scrum."

Seven of Wales' pack played on the successful British and Irish Lions tour of Australia in the summer, winning the series 2-1.

The only non-Lion is Scarlets tight-head Rhodri Jones, who has started the last two wins against Argentina and Tonga, after Adam Jones picked up an ankle injury in the defeat at the hands of South Africa.

Although Wales are set to field the seven Lions that could change as Ian Evans's wife is due to give birth.

Ospreys lock Evans, who will join Toulon at the end of the season, trained on Friday but Andrew Coombs has been put on standby.

"Obviously we are going to be looking to gain an advantage up front," insisted McBryde.

"It has been a very fruitful part of the game in the past and hopefully we can do the same on Saturday.

"We are not going to hide away from it - we are going well as a forward unit.

"We need to be confident in the fact that we have the experience, the bulk up front. We are going to play to our strengths and that being one of them.,

"We have picked a very strong team. We know the threats they pose. We have to be wary of them but also gain confidence from the way we want to play."

But McBryde dismissed the charge from the Wallaby scrum-half Will Genia that Wales has a psychological weak spot against the southern hemisphere teams - Australia, New Zealand and South Africa.

Wales have lost 57 of their last 61 matches against the big three, but McBryde said Wales do not have a problem against them and that Australians like playing mind games.

"This is part of their make-up as Australians - it's not just on the rugby field it's on the cricket field as well. It's something they like to do," insisted McBryde.

"If you want to enter into that all the best. The best advice is to completely ignore [it] and concentrate on what we need to control."