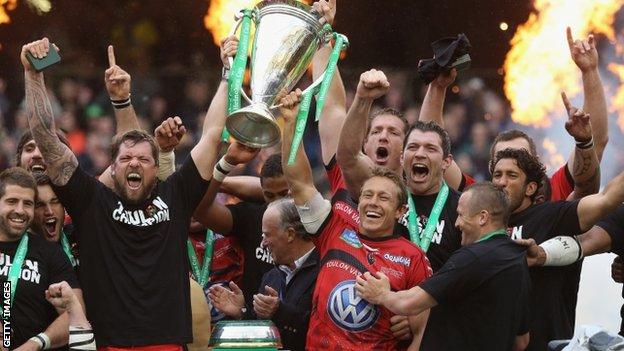 English clubs could yet play in next season's Heineken Cup, despite previously threatening to set up a rival European tournament.

French teams, who backed the new Rugby Champions Cup, have now committed to the current competition - as long as their English counterparts do likewise.

And that could happen, if a new structure is introduced for 2015-16.

"Thursday's developments have thrown up as many questions as answers. Although the French clubs have voted to play in the Heineken Cup next season - seemingly leaving the English clubs isolated - their president Paul Goze has said they will only do this if the English clubs are involved. And while Premiership Rugby has indicated they will listen to proposals, they will not be able to reap the financial benefits of their BT contract if they revert to the status quo.

"Furthermore, although the French clubs have appeared to buckle to the pressure applied by their federation, they are acutely aware that a European tournament without the English clubs will be significantly devalued."

"If somebody outlines the structure, we could look at it," said Premiership Rugby chief executive Mark McCafferty.

Disagreements about the Heineken Cup's qualification criteria, voting structure, income distribution and future television rights are behind the proposed breakaway.

Premiership Rugby, the umbrella body of the English top-flight clubs, said its teams would not participate in any tournament organised by European Rugby Cup (ERC), which runs the Heineken Cup and second-tier Amlin Challenge Cup.

And despite initially backing that stance, French clubs will now remain in the competitions for what Ligue National de Rugby (LNR) described as a "transitional year", though president Paul Goze added that was "on condition it will be staged with clubs from England".

Their reluctance to follow through on a breakaway has seen the stance of their English counterparts soften.

"If we can see there is a new structure to replace ERC and we have the detail of that, then something might be feasible, at the moment it's all very general and difficult to comment on," added McCafferty.

There is speculation that if the English clubs remain isolated, they will set up a tournament involving South African clubs, or even increase the number of teams in the Premiership.

Each of the six countries on the European Rugby Cup board have two seats.

Irish, Scottish and Italian clubs are already committed to next year's Heineken Cup, while the four Welsh regions have offered their support to a breakaway.

Regional Rugby Wales, which oversees the four Welsh regions, is yet to comment on the latest development.

The Heineken Cup is in its 20th season, with a new structure proposed for next year's tournament.

The number of participating teams will be cut to 20 from 24 and revenues will be split evenly between the three leagues - the English Premiership, France's Top 14 and the Pro12, which features Irish, Italian, Scottish and Welsh clubs - should teams from all three competitions take part.

The sport's world governing body, the International Rugby Board (IRB), remains "optimistic" an agreement will be reached to avoid any breakaway tournament being formed.

IRB chief executive Brett Gosper added: "There is still a process in place and we're hopeful it will end with all the top teams in one competition."