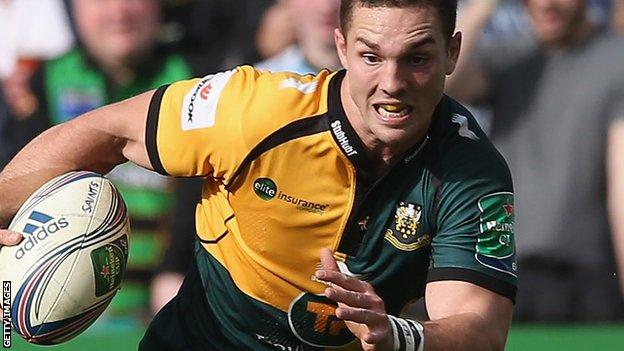 Wing George North says he is grateful for Northampton Saints' backing in releasing him for Wales duty.

Saints risk a fine by allowing the British and Irish Lions wing to play for against Australia this weekend.

Northampton said an agreement was made with the 21-year-old when he joined from the Scarlets to "allow him to represent Wales if and when selected".

"They've been good as gold to me from minute one. I'm happy to be part of a great club," he said.

The move goes against English Premiership policy, as the Test at the Millennium Stadium falls outside the International Rugby Board's autumn internationals window.

As part of an agreement between Premiership clubs, only England players are allowed to be released by teams to play for their nation outside of the IRB's Tests slot.

Premiership Rugby will investigate North's situation before issuing a punishment, but it is expected Saints, who are the first team to contravene the policy, will be fined.

North said he was concentrating on Saturday's final Test of the autumn series against the Wallabies in Cardiff.

"From their point of view they've got a few discussions coming up. I'll stay out of it until Saturday," North added.

"For me now it's just focusing on Saturday."

Wales have lost eight successive games against Australia including last-gasp defeats in their last three encounters.

North was among the large Welsh contingent on the successful British and Lions tour to Australia in the summer in which Warren Gatland's side secured a 2-1 series win.

And although Gatland has returned to his role as Wales head coach, North says the focus has been on Saturday's game rather than the events of the summer.

"Obviously it will be at the back of some of the boys' mind that were there," North said.

"But for us now it's back to Wales and focus on Saturday.

"We've worked hard the past few weeks and had one of our best autumn series for a while. We've got to back it up on Saturday now.

"[The] past few years we've come very close and it's our time to step up."