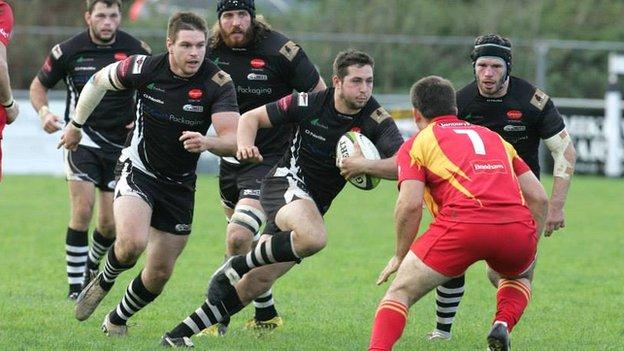 Launceston coach Cliff Rainford says his pre-season goals have not changed despite the club's inconsistent form.

The Cornish All Blacks are 11th in the National League Two South table, eight points adrift of sixth-placed Taunton.

"We set ourselves some ambitious targets at the start of the season," he told BBC Radio Cornwall.

"We finished seventh last year and with the players we've brought in, we'd hope for an improvement on that and we're still targeting that."

Rainford, whose side face Bournemouth on Saturday, said there was still plenty of time for his side to start climbing the table.

"I've already said that it will be January before the league settles down and I think that will turn out to be true.

"We've got a good run into Christmas with no really long away trips so hopefully we can put ourselves into a good position."

Launceston's home record is excellent this season, whereas away matches have yielded just one victory so far.

"Home support is really important and when you look at the league attendances, we've got probably the best support in the league so it always plays a part," added Rainford.

"It's just the little psychological thing that we're winning at home so we can carry that through week-in, week-out - the secret is to carry that into away games."