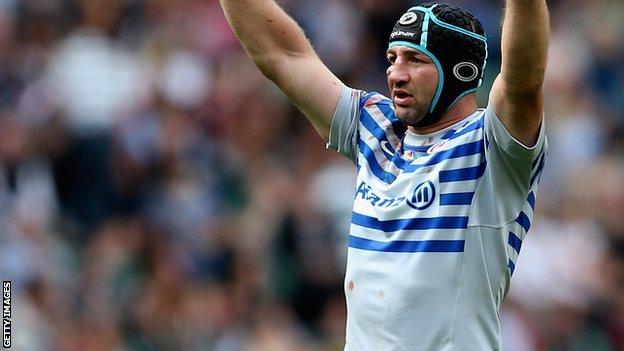 Saracens captain Steve Borthwick has announced he will retire from playing at the end of this season.

The 34-year-old former Bath lock won 57 caps for England, captaining the side on 21 occasions.

"Very few players have the chance to retire on their own terms," Borthwick told the club website.

"Saracens did ask me if I'd like to carry on but I feel that the time is right for me to finish playing at the end of the season."

He added: "That's still a few months away, and I am obviously 100% focused on improving as a player and leading this team to the best of my ability."

Cumbria-born Borthwick began his career with Preston Grasshoppers and subsequently joined Bath, where he made his Premiership debut in the 1998-99 season.

After helping Bath win the European Challenge Cup in 2008 he moved to Saracens, and has since played 125 times for the north London club.

Borthwick won his first cap for England against France in 2001 but missed out on a place in Clive Woodward's 2003 World Cup-winning squad.

The forward took over as captain of the national side from Phil Vickery in 2008 and played every minute of England's 11 Tests that year, guiding the side to second place in the 2009 Six Nations Championship.

"Steve, as a leader, as a player and as a man, sets the highest standards in everything he does," McCall said. "He will be sorely missed in due course."