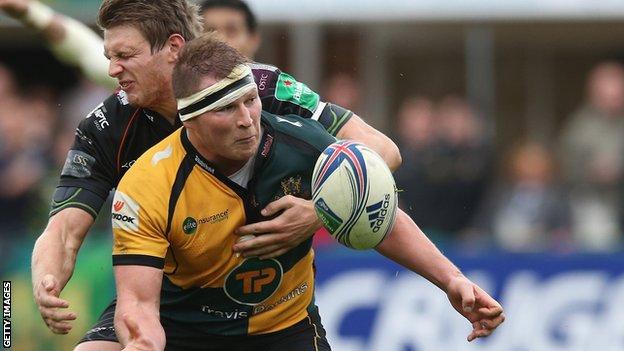 Northampton Saints captain Dylan Hartley has said he may be about to reach his prime as a hooker.

After being sent off in last season's Premiership play-off final defeat, the 27-year-old retained the Saints captaincy and played in all three of England's autumn internationals.

For club and country

"I'm enjoying it. I like my role at the club and I love being captain."

Hartley now has 50 caps for England and has added seven appearances to his Saints tally this season, taking him to 178, for a side that are second in the Premiership, two points behind leaders Saracens.

"I love being part of a good group of people," he said. "It's a group striving to win trophies and turn up every day and train hard.

"Certainly in the England setup it's very much a mirror image of what we've got here."

This time last year Northampton were in the middle of a run of five defeats in seven games.

They recovered to reach the play-off final and were eventually edged out by Leicester in the Twickenham showpiece.

"This time last year we lost a lot of games. The squad wasn't as united as we are now but we still made a Premiership final," said Hartley.

"This year we have the right talent, the right coaching setup. Everything's perfect. So there's no excuses for us not to perform."