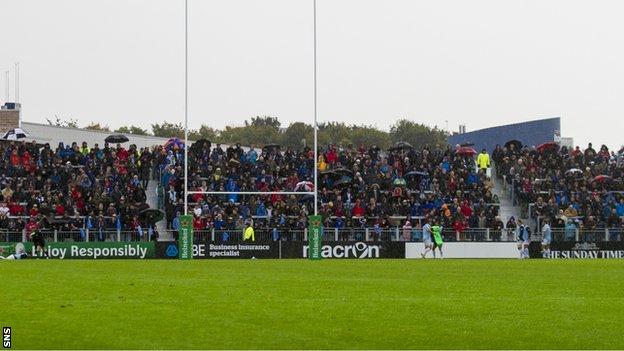 Glasgow Warriors coach Gregor Townsend hopes disciplinary action taken against seven employees this week will prove to be a one-off.

It follows an incident in Glasgow for which four players - Ryan Grant, Sean Maitland, Ryan Wilson and Rory Hughes - are

"It was disappointing when the incident happened," said Townsend.

"We know our responsibility as rugby players and we will be making doubly sure nothing like that happens again."

As a result of the investigation, the club has held disciplinary hearings with the employees concerned

When asked to elaborate on what the disciplinary action was for, Townsend said he "wouldn't be doing that", adding it was an internal matter.

The Pro12 club had earlier issued a statement on their website, stating: "Glasgow Warriors have conducted an internal investigation into an incident involving employees in Glasgow last month.

"As a result of the investigation, the club has held disciplinary hearings with the employees concerned.

"Disciplinary action has been taken against seven individuals, as a result of the incident, with a range of sanctions imposed.

"Details of the investigation and hearings will remain confidential at this time.

"The club will be making no further comment at this stage."

Scotland internationals Grant, Maitland and Ryan Wilson, plus youth player Rory Hughes, are expected to appear in court in Glasgow next month.

The charges relate to an incident outside a takeaway shop in Glasgow's Great Western Road in October, when a 29-year-old man was injured.

A Crown Office spokesperson said: "The procurator fiscal at Glasgow has received a report concerning four males, aged 20, 24, 25 and 28, in connection with an alleged incident on 27 October 2013.

"The report remains under the consideration of the procurator fiscal."

Grant is in the starting line-up to face Ospreys in Wales on Friday, while Wilson is on the replacements' bench.