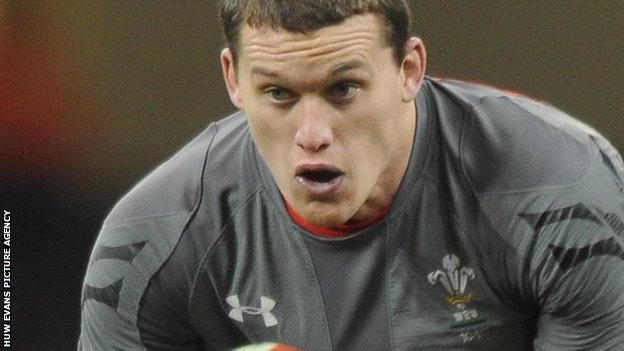 Former Wales centre Tom Shanklin has questioned whether enough is being done to stem the flow of players leaving Wales.

Ospreys' British and Irish Lions and lock Ian Evans, 29, is the latest high profile Welsh international to leave for France.

Evans, has signed a three-year contract with Toulon and Shanklin is the latest to express concern over the exodus.

"I think you've got to question the regions' ambitions really," he said.

"I know there are financial issues and I know that, but did the Ospreys do everything their power to keep Ian Evans?

"He wasn't getting much game time down at the Ospreys and they sort of look like they are filtering him out a little bit.

"I think it's a Toulon gain and an Ospreys loss."

"On his move, it's obviously disappointing. Coming back to wanting to keep our players in Wales and that's all we can ask in terms of having full release of his contract.

"I haven't spoken to Ian personally about his situation. So I'm unsure of that release, but I'm sure that he's hopefully discussed that with [Wales coach Warren Gatland and made sure that he has got release."

Evans will join Heineken Cup holders Toulon when his contract with the Ospreys expires at the end of the current season.

Ospreys backs coach Gruff Rees said earlier this month the region were aware Evans was considering his options but they were in talks with the player.

Jamie Roberts, Dan Lydiate, Mike Phillips and James Hook are among the players who have left Wales for French clubs during recent years.

Lock Evans made his Wales debut in 2006 and toured with the British and Irish Lions to Australia during the summer.

Shanklin, himself a former Lion, believes the ex-Pontypridd and Swansea player will benefit from moving to France.

"It's great for him, he's got a lot of life left in those legs," Shanklin told BBC Radio Wales Sport.

"Toulon is a different place to Aberdare. I'm not saying it's better or anything, but it's different.

"It's basically - let's be honest - a Barbarians team isn't it. They buy the best of the best really and he will learn a lot from that, and I think it's a good move for him."