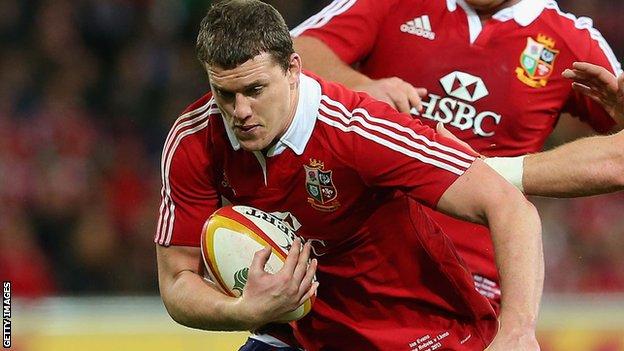 The player has agreed a three-year deal and will move to France when his Ospreys contract ends next summer.

Double Grand Slam winner Evans is in the Wales team to face Australia in Cardiff on Saturday.

Toulon confirmed the signing on the club's website on Tuesday, ending several weeks of speculation about the player's future.

Evans' departure is a blow for the domestic game in Wales, with the 29-year-old adding to a growing list of international players plying their trade outside Wales.

James Hook and Luke Charteris are well-established at Perpignan while wing George North is in his first season with Northampton, while Paul James continues to be a key member of the Bath pack.

There are also concerns in at the number of high-profile internationals whose current contracts come to an end in 2014.

Blues trio of Leigh Halfpenny, Sam Warburton and Bradley Davies are all out of contract at the end of this season with 2013 Lions man-of-the-series Halfpenny also being linked with Toulon.

Warburton, who captain the Lions in Australia, is said to be uncertain of his plans because of the row over the future of the Heineken Cup while Davies is being linked with Wasps.

At the Ospreys, tight-head Adam Jones and second row Alun Wyn Jones are also out of contract in the summer of 2014.

Adam Jones has claimed he is too old to play in France, though has given no indication about his future plans.