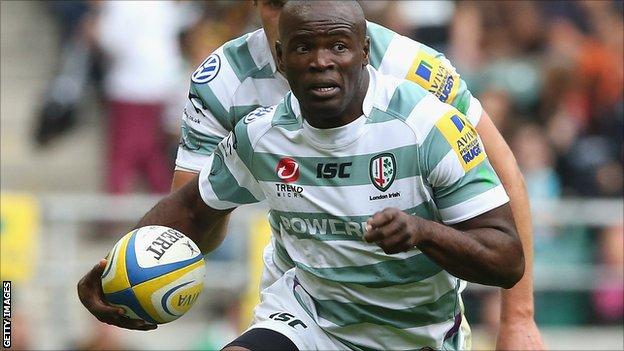 London Irish winger Topsy Ojo has signed a three-year contract extension and will remain with the club until the end of the 2016-17 season.

Ojo, who is currently celebrating his testimonial year, will make his 200th appearance for the club this weekend against London Wasps.

The 28-year-old academy graduate has scored a club-record 65 tries for the Premiership side.

He has also won two caps for his country, scoring two tries for England.

"I'm not sure there is a finer person in the Premiership," London Irish director of rugby Brian Smith told BBC Radio Berkshire.

"Topsy is a wonderful role model for all players and I'm delighted to have witnessed half of his career.

"In 2005 when I arrived he was already an established first team player. This team means a lot to him and he means a lot to us, He is a wonderful professional and an outstanding talent.

"He has scored some ridiculous tries and he just keeps delivering at the highest level. Three years is a big commitment but he is a genuine London Irish legend and for him to play out his whole career here would be very fitting."

Ojo himself was delighted to secure his future at the Berkshire club and paid tribute to everyone who had helped him over the years.

"I joined London Irish straight from school and the club have been brilliant to me over the last 10 years," he said.

"It's always an honour to wear the London Irish shirt and I'm looking forward to pushing on over the next three years with this group of players.

"The support I have received over the years has been amazing and I'm also looking forward to achieving many more milestones with the club."